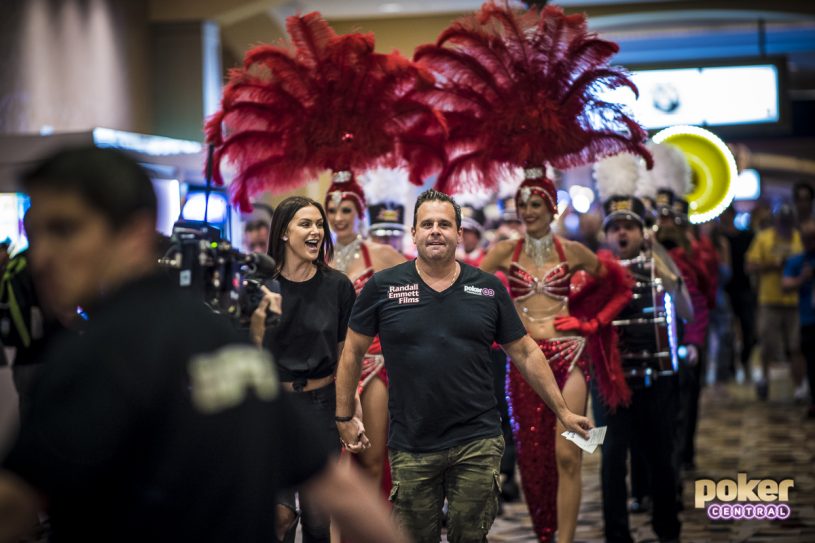 Randall Emmett & Lala Kent walking into the Rio during the 2018 World Series of Poker Main Event.

A little more than a year ago, the poker world became familiar with the flamboyant, talkative, high-energy, and fearless Randall Emmett. Over the course of Poker After Dark’s exciting run since its return in the summer of 2017, Emmett is among the players that have the most appearances on the show along with a Friday Night Poker and Deep Issues appearance. In this article, we break all of them down for your viewing pleasures!

Who is Randall Emmett?

Randall Emmett sat down in Drea Renee’s massage chair during the World Series of Poker and he gave answers to some very interesting questions that might give you a better sense of who he is! Click this link right now to watch this interview. If you want the briefest recap with the best moments from Emmett in 2018, check out his Best Of video on PokerGO. Still wondering whether Emmett is entertaining enough? Check out the Best of Poker Personalities to see his antics on display.

Randall Emmett’s appearance on Friday Night Poker was arguably one of the most entertaining nights of poker in 2018. Friday Night Poker brought you weekly entertainment in 2018 as the PokerGO Studio played host to a $5/$10 No Limit Hold’em game with lots of banter!

Randall Emmett appeared on Poker After Dark no fewer than 13 times and plenty of those were highly memorable. Emmett battled with Jennifer Tilly and Don Cheadle during Moving Violations, one of the most star-studded lineups closely followed by Masters of the Main. Looking for something a bit easier going? Holidays with Hellmuth was a Sit & Go hosted during the 2017 Christmas season when he went up against Phil Hellmuth, Antonio Esfandiari, Maria Ho, and Mike Matusow.

Earmuffs might be needed, but Talk the Talk was highly entertaining as well when Emmett squared off against Antonio Esfandiari, Maurice Hawkins, Mike Dentale, Jared Jaffee, Danielle Andersen, and the recently passed away Mickey Craft. Clashing with Jennifer Tilly again, Emmett played on Under the Gun week where we also saw Jean-Robert Bellande, Daniel Weinand, and Eli Elezra.

During Solve for Hollywood, Emmett kept it light-hearted while Matt Berkey, Garrett Adelstein, and others tried keeping a straight face. During two nights of $200/$400 action on The Prestige, Antonio Esfandiari and Bill Perkins were the headliners and Emmett tangled with them many times. During Voices Carry, Liv Boeree, Igor Kurganov, Greg Mueller, and Jason Koon were taking on Emmett in a winner-take-all Sit & Go worth $150,000.

And then for the Main Event of this article, enjoy watching the highlights of Day 2 of Run it Once Week on Poker After Dark from last week.