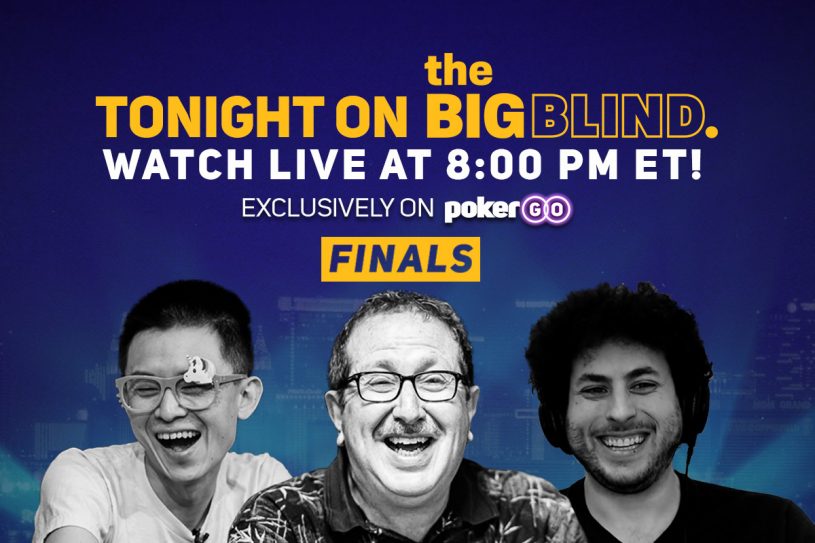 Lights, cameras, action! The stage is set for the grand final of The Big Blind as Norman Chad, Alex Jacob, and Ben Yu will fight it out tonight with a $15,000 top prize up for grabs along with eternal fame and recognition as the most skilled poker, Las Vegas, and gambling trivia player in the world!

“The Big Blind” on PokerGO pits some of your favorite poker personalities up against each other for a battle of poker, gambling, and Las Vegas trivia hosted by Jeff Platt. Over the course of several weeks, the initial field of 18 players was brought down to four quarterfinals, and after last week’s semifinals, only three players remain.

The show’s host Jeff Platt previewed the action as follows, “We have quite the finale to cap off the inaugural season of The Big Blind. Ben Yu and Alex Jacob have navigated a tough road to the championship with relative ease. Somehow, someway, Norman Chad will join them for the finale. This episode brings with it some major entertainment and some major drama!

The Path to the Final

Having spouted and touted his poker trivia knowledge during the World Series of Poker broadcasts for many years, it will come as no surprise to many that Norman Chad qualified for the finals winning all three of the match-ups he was involved in and he will enter the final as the top seed. Chad’s toughest round was arguably the first one where he beat out Mike Matusow and Sarah Herring in a close one.

The second seed coming into the final is Alex Jacob who draws from years of trivia experience along with an epic run on Jeopardy! Jacob was dominant in his first match-up against Matt Berkey and Ben Yu but barely made it into the semifinal in which he beat Barstool Nate and Justin Young.

The third and final seed in this finale is Ben Yu who used his GTO approach to sneak into the finals without winning any of the match-ups played. Yu made it through with strong second-place scores but that won’t cut it tonight! Looking for a specific episode of The Big Blind? Check the overview below and tune in. Watch the final right here.

Don’t miss out on The Big Blind and an extensive library of live and on-demand on PokerGO so subscribe right now. You can also find Poker After Dark, Super High Roller Bowl, and World Series of Poker episode on PokerGO.