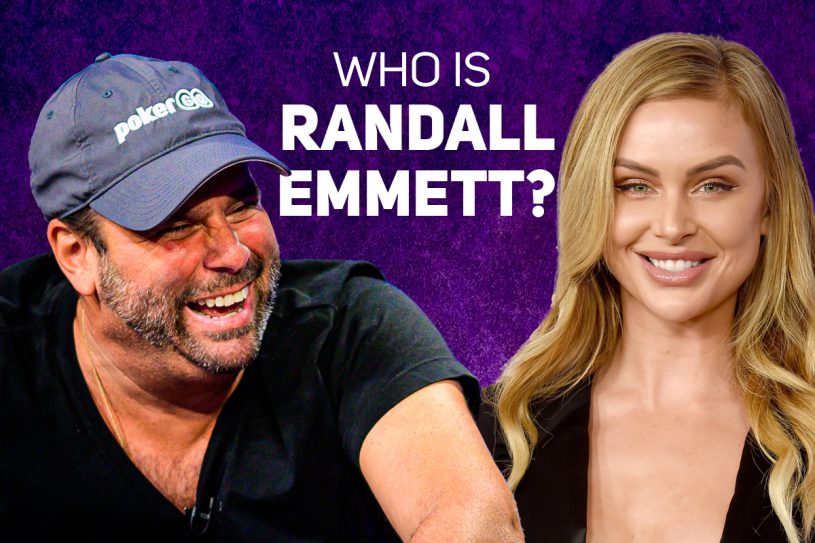 He's the fiance of Lala Kent, loves poker, and is a big-time Hollywood producer, but who really is Randall Emmett? (Image: Poker Central/Getty Images)

Randall Emmett’s personality enters the poker room a clear minute before he does. Behind some of the most entertaining moments on PokerGO, Emmett is the fiancé of Lala Kent, and the Vanderpump Rules star is clearly as big a fan of boyfriend-turned-life-partner Randall Emmett as we are. Lala and Randall are best friends as well as partners, and when it comes to Vanderpump Rules, it’s clear that Randall is right on the party line.

THE PRODUCER BEHIND THE IRISHMAN HAS HOLLYWOOD CREDENTIALS

Emmett, who turned 49 in March 2020, began Hollywood life as an assistant to Mark Wahlberg, but quickly founded his own production company and is now a famed film producer, with movies such as Wonderland, The Wicker Man, 16 Blocks, Alex Cross and The Irishman in his credits, the latter being broadcast to much fanfare on Netflix in late 2019.

If Hollywood producers could pick a partner, then they’d probably go for an outgoing reality TV star who has just as much personality as they do. So it’s probably a great thing that Randall Emmett met Lala Kent of Vanderpump Rules, the long-running reality TV series about the SUR Restaurant.

TAKING TIME OUT AT THE FELT

When Emmett isn’t spending time with his other half Lala, he can often be found at the poker table, showing off his own considerable talent in the reality show of the card game world that is poker. The never-ending drama of the game and excitement it provides all year round was typical of the fun had in the World Series of Poker ‘Main Event Hangover’ cash game. It featured Mike Matusow, Main Event champion from 2019 Hossein Ensan and of course Randall Emmett playing some classic No Limit Hold’em action.

CASH IN THE HAND

While he has easily over half a million in tournament winnings, Emmett is perhaps best at home in a cash game, where his entertaining personality, whip-smart wit, and poker props combine to provide a powerful combination. A highly-skilled player, watching Emmett taking on players such as Chris Moorman, Dan Shak, Frank Kassela and Marle Cordeiro among others in a $5/$10 cash game is highly entertaining stuff!

THE MAN FOR ALL POKER SEASONS

While Randall Emmett is a favorite among this generation of poker fans, who love his wacky antics combined with poker smarts attitude, Emmett appeals to all ages and is as popular with regular Joe’s aspiring to live out his reality TV lifestyle as he is with housewives who can see themselves in Lala and the other stars of Vanderpump Rules.

When it comes to bringing fun back into poker, Randall Emmett is doing a great job of taking on the role of poker players who entertain and impress in equal measure all by himself.

You can watch the Best of Randall Emmett on PokerGO right here.

You can watch stars of the small screen such as Randall Emmett all day every day when you subscribe to PokerGO. From the latest tournaments like last week’s Super High Roller Bowl Sochi to classic WSOP Main Event coverage, it’s unmissable poker.