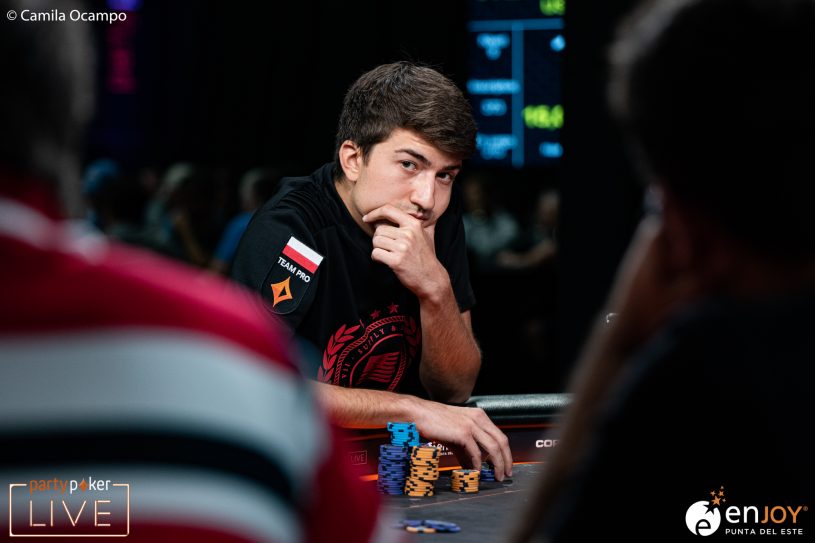 Dzmitry Urbanovich and Marty Mathis are among the big stacks of the 65 remaining hopefuls out of the field of 456, all of which are in the money, eying the top prize of $1,000,000! The action was intense and strenuous on Day 2 as the field of 177 remaining players battled hard for the min cash worth $20,000. Relive the Day 2 action on the PokerGO stream right here or check out the full blog right here.

Day 2 of the partypoker MILLIONS South America got underway at noon with 177 players having survived their starting days. Numerous players bought in before play got underway to boost the entries-number, and even more reentered after falling short in the first two levels.

The players kept a close eye on the monitor to see what the number of entries was, as the guarantee dictated a need of 500 or an overlay would be in play. Ultimately, partypoker had to pay a bit out of pocket as their lofty $5,000,000 guarantee was not reached with 456 entries total. Four hundred twenty of those came from the live part, with thirty-six more having entered online.

Fabrizio Gonzalez started the day as the chip leader but would ultimately not make the money. Another player that began as a big stack, defending champion Marty Mathis, faired much better. He flopped quads in a huge pot and busted two players to start a good day. Like he had done in the Super High Roller earlier this week, Mathis battled with countryman Jacob Daniels throughout the day and ultimately came out on top. Daniels saw one big hero-call fail and hit the rail before the day was over.

partypoker chairman Mike Sexton played many of his hands at the feature table. PokerGO subscribers saw him get eliminated by Yuri Dzivielevski with Sexton’s ace-jack failing to outdraw Dzivielevski’s kings.

Bracelet winner Dzivielevski would not use Sexton’s chips to his advantage, as he ultimately ended up bubbling the partypoker MILLIONS South America Main Event. Down to a single big blind, he was all in holding queen-three suited against Jack Sinclair’s pocket aces. Besides picking up a gutshot on the turn, he never stood a chance.

The sixty-five players that made Day 3 are all guaranteed a min-cash of $20,000. The goal is to play down to a final table of eight players or eight levels. Making the final table nets the lucky eight a minimum of $100,000 while the winner takes home a whopping $1,000,000!

With the five online survivors joining the field, the blinds are rolled back to 100,000/200,000 and a 200,000 button-ante. Check back at noon as the partypoker MILLIONS South America Main Event gets into its most exciting stage with cheques getting handed out! New to PokerGO? Subscribe right now to not miss a minute of the action.