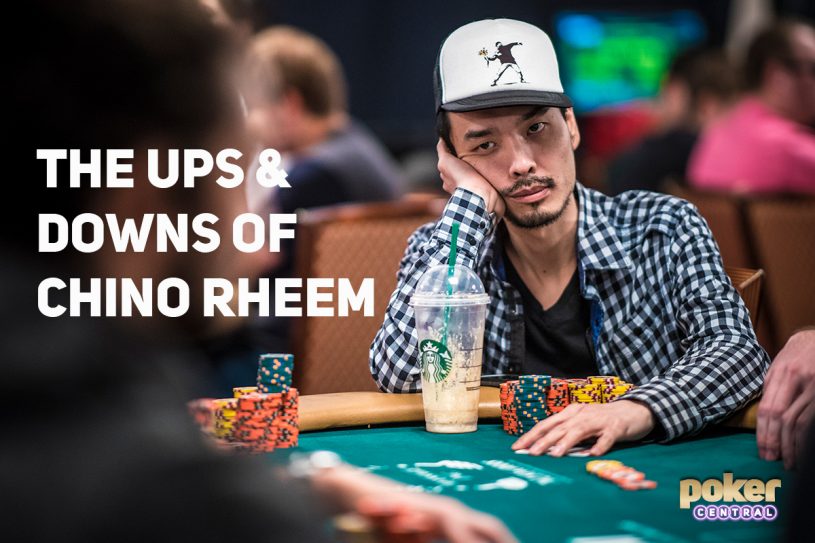 David 'Chino' Rheem is a polarizing character in the game of poker!

Some poker legends are thrust into the spotlight with a high-profile win that defines them. Others grind up the levels of buy-in slowly and surely. David ‘Chino’ Rheem fits into neither category and is one of the most unique characters in the game we all love. Whether you know him as Chino Rheem or David Rheem, the Los Angeles product is everyone’s favorite poker enfant terrible.

THE MAN BEHIND THE MYTH

Turning 40 next year, three-time World Poker Tour champ David Rheem, known thereafter as ‘Chino’, is a serial winner at the felt, but someone who has courted controversy over the years, too. With over 100 cashes on the live circuit, Chino learned to play poker at the Seminole Hollywood Casino, playing against brothers (and dealers) Robert and Michael Mizrachi.

Having spent a little bit of time in jail in Florida, Chino pursued his career with polite dedication, progressing through the levels in 2005 to play a live event at the EPT Monte Carlo, where he made his first NLHE final table at a major festival. Chino would finish third for $10,000 and it would be followed by his first cash at the World Series of Poker. Chino had arrived, and one of his greatest achievements was about to follow.

THE MAIN EVENT WHERE CHINO HITS THE BRICKS

Chino made it all the way to the final table of the biggest event in the world in 2008 as he reached the final ‘November Nine’ in the WSOP Main Event. Going into play 7th in chips out of the nine, Chino would finish where he started, in 7th, for $1.7 million, to date still his biggest live cash. But the manner in which he went out will probably still hurt today.

All-in against eventual winner Peter Eastgate, Chino had ace-king and Eastgate had ace-queen. A queen on the flop and no help send Chino home when he might have been in pole position to win had he held.

If the Poker Gods were conspiring against him in the World Series in 2008, by the end of the calendar year, Chino had his landmark victory.

Taking down the Season 7 Doyle Brunson Five Diamond WPT Classic, Chino won $1,538,730 and finally had a trophy to match his talents. More big wins would follow, including a $20,000-entry 6-Max NLHE event win at the first-ever Epic Poker League. That victory would earn Chino another seven-figure score, with a cool million going his way.

As he was celebrating his victory in the Epic Poker League, Chino’s notoriety meant he had to hand much of his winnings back – to players that he owed money to. Making good on his debts, Chino saw his Epic Poker League membership put on probation, with rumors of owing money never something a poker player wants to have follow them around. The Epic Poker League ultimately turned out to be a disaster itself. Rumors of Rheem’s financial situation, reputation, and whether he’s paid all his debts flair up every now and then but he always manages to stay in action.

Chino has since become a huge name on the international poker circuit. With over $10 million in winnings, one of his highest-profile wins was the 2019 PCA Main Event, which he won for $1.5m, defeating Daniel Strelitz heads-up. He also won his third World Poker Tour title at the Seminole Hard Rock Poker Finale in Hollywood for just over $700,000 at a final table that saw Adrian Mateos finish 4th.

You can follow the ups and downs of the greats of the game such as Chino Rheem like nowhere else on PokerGO. Subscribe today and gain 24/7 access to live poker such as the WSOP Main Event, and Super High Roller Bowl streams, as well as documentaries and classic shows like Poker After Dark.