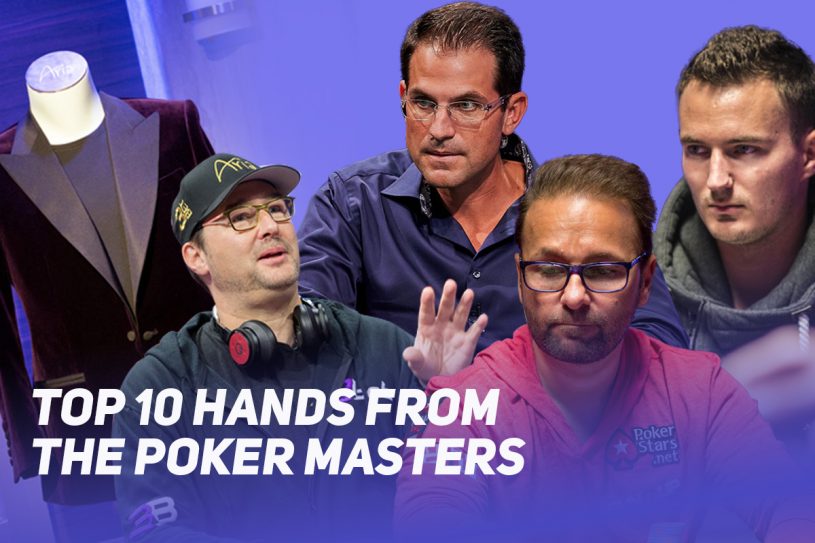 Phil Hellmuth, Brandon Adams, Steffen Sontheimer, and Daniel Negreanu are involved in the Top 10 Poker Masters hands of all time.

Since it’s inception in 2017, the Poker Masters has thrilled viewers on PokerGO. From the crowning of German professional Steffen Sontheimer as the inaugural winner to Ali Imsirovic’s victory in 2018, every top player wants to fill the sleeves of the famous Purple Jacket.

Here are 10 of the very best hands from the Poker Masters story so far, with five spectacular situations from 2017 followed by five more historic hands from 2018.

Phil Hellmuth can usually be relied on for three things in no limit hold’em – action, drama and success. In this classic hand against the eventual 2017 Poker Masters winner, Steffen Sontheimer, he achieves two out of those three.

Koray Aldemir has won $12 million in live tournaments alone, but his winnings in the 2017 Poker Masters event were curtailed at just $153,000 when Daniel ‘Kid Poker’ Negreanu managed to river a straight on the river to top Aldemir’s flopped middle set.

If you’re going to bluff on the river against one of the best poker players of all time, then the story you’re going to have to tell has to be so good, J.K. Rowling gives up her pen. Step forward, Steffen Sontheimer.

Phil Hellmuth may sometimes adopt his alter-ego, a.k.a. The Poker Brat, but he was on his best behavior here, despite facing an all-in from Steffen Sontheimer that he called “either a nightmare or a dream”. But could Hellmuth work it out, or would he lose almost all of his chips?

There’s running hot, there’s running so hot you need to wear asbestos gloves to take off your jogging shoes and then there’s Ben Lamb in this hand against Cary Katz. Warning: fire hazard.

6. Dr. Octagon is a Smooth Operator

If Daniel Negreanu was in contention before this hand, it didn’t last long. Two over-pairs to the board and by the river, it was all over for Kid Poker courtesy of Brandon ‘Dr. Octagon’ Adams.

After a grueling heads-up to and fro, it was Isaac ‘Ike’ Haxton who managed to get the better of Maurice Hawkins to win the first Poker Masters Short Deck title when his ace-queen rode home in style in the final hand.

9. Lehr Comes Back to Win

Keith Lehr took home $333,000 when he toppled Jonathan Depa heads-up, but it was nearly all over the other way round. Watch how Lehr went ‘from zero to hero’!

10. Peters and Kempe Go to War

David Peters and Rainer Kempe get all the chips in before the flop as a raising war ends up with both big guns committed all the way to the river.

Will YOU be watching this year’s Poker Masters? You can check out the upcoming live events right here and make sure that you subscribe in time for Bonfire Night when there’s sure to be fireworks on PokerGO!