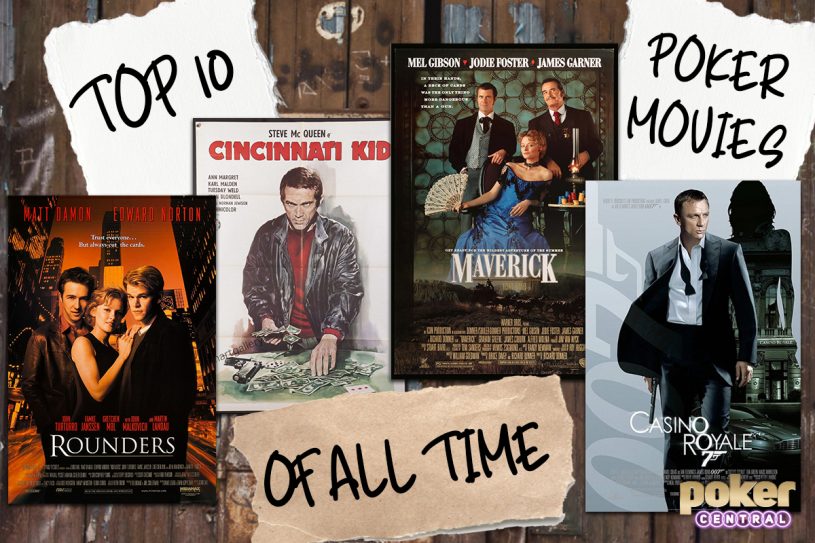 Here's a breakdown of the Top 10 poker movies of all time!

There’s nothing a poker fan enjoys more than the drama and excitement of a poker movie. Over the years, many Hollywood films have attempted to create great films around the game of poker. But what are the best poker movies? And which poker films are ones that fold before the flop?

THE CREAM OF THE CROP

We’ve shuffled the deck and pulled out every premium hand, tossing away the guilty pleasures such as Runner, Runner, All-In and Lucky You, a poker film so bad even the bits they left on the cutting room floor felt fortunate to miss the final edit. Perhaps that should lead us to one day write the article worst poker movies of all time, but for now, let’s dig into the real gems!

“In poker, you never play your hand. You play the man across from you.”

While the James Bond movie has, perhaps rightly, attracted plenty of criticism for the lack realism in the final hand (four-bet shove for six big blinds, anyone?), a Bond film being centred around poker is really cool. A lot of the best bits are the scenes that take place around the poker table, such as Bond’s near-fatal cardiac arrest, Le Chiffre’s death at the hands of the men he was supposed to pay back with the winnings and every moment involving Felix Leiter. Overall, the poker works, it’s just that the gameplay flaws that prevent this being a bona fide poker classic. Watch this movie right now on Amazon Prime.

“How do you play this game?”

Taking place almost exclusively at Laredo is a high-stakes poker game. It only happens once a year, and when Henry Fonda’s Settler Meredith collapses during the game his wife Mary replaces him, to plenty of laughs in this comedy caper. Plenty of charm and a tight fit at 95 minutes. Watch this movie right now on Amazon Prime.

“When’s the last time you loved yourself?”

An oddity among the Top 10 is this turn of the Millennium film about a lost lottery ticket that ends up being up for grabs in a home game. The twist of this poker movie is that the person whose lottery ticket was taken from his found wallet and ends up in the weekly poker game for a bunch of twenties, an old man played with panache by James Earl Jones, turns up. He’s prepared to play to win it back. Watch this movie on Amazon Prime right now.

“You know what makes you feel okay about losing? Winning.”

Written by Aaron Sorkin and starring Jessica Chastain and Idris Elba, this notorious Hollywood movie about the in-crowd of celebrities who used to play Molly’s Game, is easily one of the better poker movies made in the last few years. That it isn’t higher is probably due to the fact that while the movie has some style, it lacks a little in the entertainment stakes, and comes in at a languid 2 hours and 21 minutes. Watch this movie on Amazon Prime right now. Check out the book this movie was based on here.

“I hardly ever bluff and I never ever cheat.”

One of the most profitable movies in our countdown is the excellent mid-90’s western comedy that features Mel Gibson and James Garner alongside Jodie Foster. Directed by Lethal Weapon’s Richard Donner, the movie cracks along at a whip-smart pace and delivers right to the final frame. With a massive budget of $75 million, the movie could easily have cost the studio a fortune if it bombed. Instead, it made over $180 million and it was seen as a huge success. Watch this movie on Amazon Prime right now.

Talking of impressive budget-to-box-office rations, The Sting cost just $5.5 million and netted almost $160 million at cinemas, bagging seven Oscars and being nominated for 10. A crime caper, the film is a masterpiece, and stars Robert Redford and Paul Newman as the prodigious small-town crim and experienced con artist. The only reason this isn’t two places higher is that the ending feels a little rushed, and it feels – a little like Rocky IV – a return match in the final scene would have been an even more dramatic ending. Watch this movie on Amazon Prime right now.

Speaking of crime capers, this is more crime than caper and all the smarter for it. The movie starred Edward G. Robinson and James Cagney and was the only time they shared the silver screen, despite both men playing most of the gangsters of 1930’s cinema. The plot centers around Nick ‘The Barber’ Venizelos, who is half-staked by his customers to partake in a high stakes poker game, only for him to be hoodwinked and have to fight for revenge by saving up all over again for the buy-in. An absolute classic. Watch this movie on Amazon Prime right now.

“I don’t need marked cards to beat you, pal.”

Can the kid become the man? Steve McQueen is on a mission to prove he can as he plays one of the most iconic roles in his illustrious career, the Cincinnati Kid of the movie’s title.  A little like the plot of 1961’s The Hustler, McQueen plays Eric ‘The Kid’ Stoner, a young poker player who is taking on the best to become the man. Fitting, then, that he must defeat Lancey ‘The Man’ Howard, who is an older man who, while physically different from Fats Domino, still represents the same kind of challenge that Paul Newman once rose to at the pool table four years earlier. Watch this movie on Amazon Prime right now.

“Let’s bet it all, double or nothing.”

A road movie, a gambling movie and a poker movie rolled into one, Mississippi Grind stars Ryan Reynolds and Ben Mendelsohn as two gamblers who meet up and run from their two to Mississippi in order to pay off their debts. Along the way, Mendelsohn gives an amazing performance, utterly convincing as the hopeless yet pitiable Gerry. If you’ve never seen it, then you must make it the next movie you see. Because we know you’ll have seen the movie at the top of our chart. Watch this movie on Amazon Prime right now.

The timeless poker classic, Rounders is perhaps the only movie on our list that truly, fully explores poker on so many levels as it does. On each level, from friendship to bankroll management, from the World Series of Poker to winning against Johnny Chan.

The story of Mike McDermott and Worm taking on Teddy KGB in their bid to rescue the lost money from the opening scene is the very core of what makes poker… and Rounders so special. Matt Damon and Ed Norton are in the form of their lives – and this is two years earlier than Norton’s signature career movie of Fight Club. John Malkovich makes the best baddie of all time and the pay-off after each set-up is amazing. Watch this movie on Amazon Prime right now.

If you want to watch classic poker action every day of the week, then subscribe to PokerGO and you’ll have 24/7 access to the best poker content in the world.