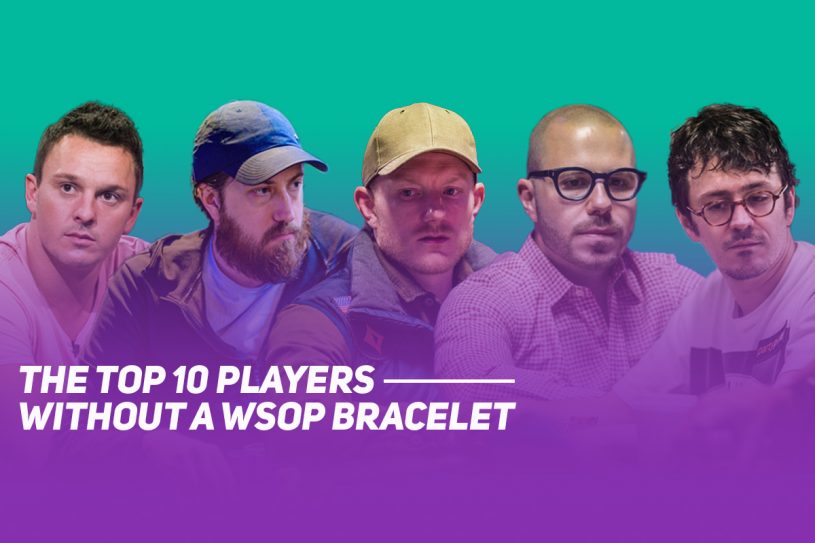 Sam Trickett, Steve O'Dwyer, Jason Koon, Dan Smith, and Isaac Haxton are among the biggest names to have yet to win a World Series of Poker Bracelet.

It’s the event that everyone wants to win in their professional poker career – the World Series of Poker bracelet event.

But which big names haven’t won a WSOP bracelet? There are some big names yet to grab gold, and you might be surprised at who has missed out over the years.

Having won $36.7 million in live tournament earnings over his career, Dan Smith is by far the biggest winner never to put that famous gold bracelet on his wrist. He’s been runner-up before, earning just over $3 million for his 2nd-place finish in the 2016 $111,111-entry High Roller for One Drop, beaten to the bracelet by German Fedor Holz in his standout year. Smith has also finished third in bracelet events on no less than six occasions, with the best – or worst depending on your point of view – result being his $4 million score in last year’s 2018 Big One for One Drop, topped only by – you’ve guessed it – Fedor Holz again and Justin Bonomo, who won the event.

One of the most respected tournament poker players in the world, Jason Koon hasn’t actually played as many bracelet events in recent years as others, but is that because he’s come so close? Koon was runner-up in the 2012 $3,000-entry Heads-Up event, but couldn’t see it out, trumped in the decider by Leif Force. The closest Koon has come to a bracelet in the past couple of years is his 5th-place finish in the 2018 $25,000-entry PLO event that was won by Shaun Deeb, though Koon also came 7th in the $100,000 High Roller that was won by Nick Petrangelo.

He’s cashed 14 times in the World Series of Poker in America, and four times in WSOP Europe events, but incredibly, Seve O’Dwyer has never won a WSOP bracelet. In fact, the closest he has come to grabbing that gold that his prowess at the poker table surely deserves is a 5th-place finish in the 2015 WSOPE $500 event entitled ‘Oktoberfest’, which was won by German player Dietrich Fast. O’Dwyer has never been one to play events for the sake of it, but how good would it be to see him run deep in Rozvadov this October and November?

While he’s known as much for his cash gameplay as he is tournament poker, ‘Ike’ Haxton has yet to win a WSOP bracelet, although he got close more recently than some of his peers in this poker rundown. Haxton came 4th in the 2018 $50,000-entry Event #77, which was conquered by Ben Yu. Haxton’s runner-up finish came 10 years ago in 2009, when Russian player Vitaly Lunkin beat Haxton to a high-profile victory – the 40th-anniversary WSOP event where the buy-in was $40,000 and the top prize that Lunkin scooped was $1,891,012. Haxton took home $1.1 million for his troubles, but he has never got as close to a WSOP bracelet in the 10 years since.

The Belarussian Beast, on his rampage up the all-time money list has stalled when it comes to sealing the deal and winning that gold WSOP bracelet. Giving him the benefit of the doubt, however, Badziakouski is a lot younger than most on this list at just 27 years old, and, to be fair to him, his five cashes in WSOP events have yielded two runner-up finishes, a third-place and two fourth-place finishes. With all four of his cashes coming in WSOPE events, perhaps Badziakouski is the favorite to prove this list historically inaccurate when Rozvadov action returns later this month.

Quite how Jake Schindler hasn’t won a WSOP bracelet, no-one knows, least of all him in all probability. With 39 cashes and over $1.1 million in earnings from WSOP events, Schindler can hardly be distraught with his performance in World Series of Poker over the years. Schindler has won a WSOP circuit ring, at the Palm Beach Kennel Club in a $345-entry event worth $24,736 for the win, but the bracelet still eludes him. Schindler did come 67th in this year’s WSOP Main Event, but he’s still waiting for that bracelet moment.

German crusher Rainer Kempe may have cashed for over a million dollars at the World Series of Poker, but he’s never got his hands on that bracelet. He came oh-so-close in 2019 when he finished 4th in the $600-entry Mixed No-Limit Hold’em/Pot-Limit Omaha Deepstack 8-Max event which was won by Aristeidis Moschonas. Kempe is sure to put himself in contention to win a WSOP bracelet over and over again in years to come, so we expect this anomaly to be corrected very soon, and he’ll certainly be hoping so.

Could the second most successful poker player from Great Britain be the biggest player never to have won a WSOP bracelet? There was a time when everything Sam Trickett touched turned to gold, but those days haven’t been in the World Series for many a year. The closest Trickett ever got was in 2012 when he came 2dn in the $1 million-entry Big One for One Drop event which was won by ‘The Magician’, Antonio Esfandiari. ‘Tricky’ will need to travel to Rozvadov to give himself a chance of winning one this year.

Having starred in the recent British Poker Open, German player Christoph Vogelsang has $6.3 million to his name in WSOP winnings… but no bracelet on his wrist. The highest-profile near-miss for the high roller crusher was the Big One for One Drop that was won by a not-very-talkative Daniel Colman back in 2014. In that event, Vogelsang just missed out on the heads-up battle between Colman and Negreanu, exiting in 3rd place.

The Big Cheese himself…has never taken that most prized piece of cheddar. Marchese has come second in a WSOP event before, finishing as runner-up in the $1,500 Limit Hold’em event won by Paul Michaelis. Marchese has cashed an awesome 26 times in the World Series of Poker since he started playing the game in 2009, but despite racking up $18,988,194 in lifetime tournament earnings, is yet to wear that golden WSOP bracelet.

Watch the best of the best compete on PokerGO as we provide more than 100 days of live poker every single year. Subscribe right now.