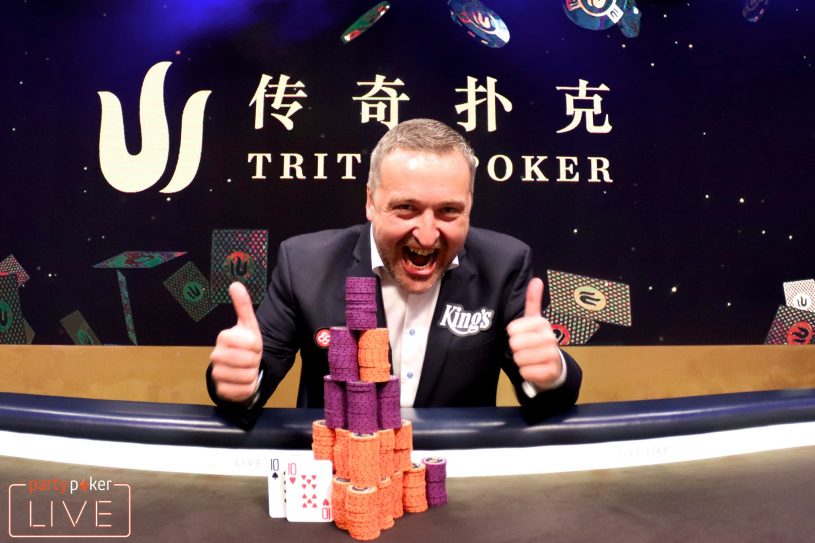 After two days of dramatic action, Antanas Guoga, commonly known as ‘Tony G’ to millions of poker fans worldwide, took down the partypoker LIVE MILLIONS Short Deck title to win€237,250 (a massive $264,308 in American dollars) in Rozvadov and return to the headlines of the poker press around the world.

BACK ON THE RADAR

While the two locations share a bustling atmosphere, heated discussions and differing opinions on the right move forward, glory is available at the poker felt, and Guoga is at home where there is glory on the line.

TONY FLIPS FOR THE WIN

While post-flop play in Short Deck is often skewed by the number of cards in the deck – hence the name – it was an all-in pre-flop scenario that gave Tony G the victory, his pocket tens making a full house on the river to hold against runner-up Yake Wu’s ace-jack.

For Wu, it would be a disappointing end to a final table he played a huge part in, along with third-placed owner of King’s Casino Leon Tsoukernik and fourth-placed finisher Cary Katz. Of the 21 players who entered the tournament, just five would cash, with the Malaysian player Choon Tong Siow sneaking into the money.

Two players would kick off the final table yet lose money overall. Paul Phua, who enjoyed such success in the Triton Million last week and Liang Yu, who would bubble this event, were knocked out in seventh and sixth place respectively to go home empty-handed from the event.

It was to be Tony G’s hour in the sun, and the man himself was no shrinking violet, celebrating loudly upon the conclusion of the event, posing for photos with the glee of a man happy to be bathed once again in the limelight to which he had become so accustomed in the early part of his poker career.

GET BACK TO… THE BOOKS?

Maybe Tony G will tell himself in the future ‘Get back to Rozvadov’ if he wants to win big, with some huge prizes handed out across this $9.5 million-guaranteed festival. With plenty more events to come on the partypoker LIVE MILLIONS schedule until the 18th August alone, Tony G will have a lot more chances to win big, along with everyone else who puts their hat in the ring of course.

Freely admitting after the event in an interview with our friends at PokerNews that he’s ‘not a short stack guy’, Tony G enjoyed being big-stack, wielding the axe like he does his inimitable personality – without compromise. He’s promised to study the game more and put time back into poker. After five years spent deep in politics, Tony G has risen once again from the ashes of a love affair with poker to prove that it still makes his heart beat faster than anything else and that after all this time, his poker career can still fly high.