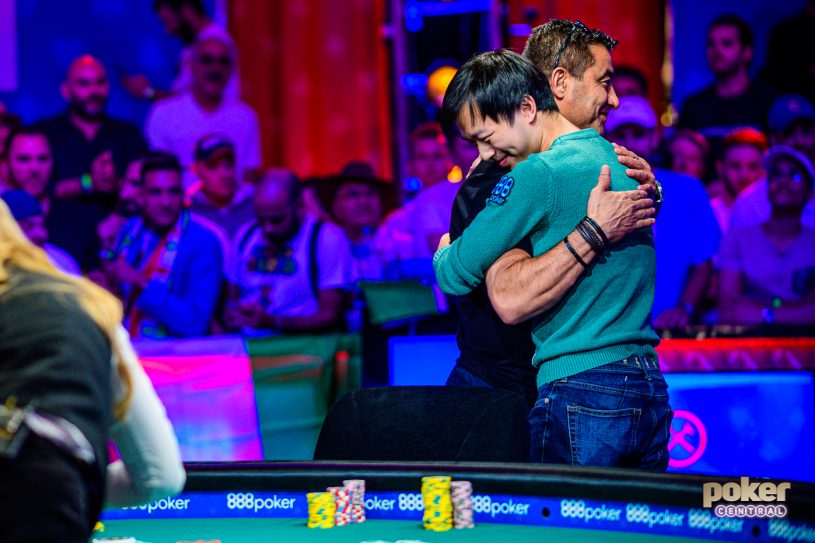 Timothy Su hugs Hossein Ensan after getting eliminated in 8th place for $1,250,000.

Timothy Su finished in 8th place in the 2019 World Series of Poker Main Event for $1,250,000. On his final hand, Su moved all in for 17.7 million under the gun and got called by chip leader Hossein Ensan. Su held a pair of threes and lost to Ensan’s ace-jack when the board brought two jacks.

“I think it was phenomenal,” Su spoke about his tremendous run that ended in eighth place. “I’ve been saying the whole tournament, I came in with zero expectations and just making the min cash would be awesome. But somehow I was able to spin it up, maintain a chip lead chip,

At one point on Day 7, Su had a fifth of the total chips in play but then things turned and he lost a series of big pots before entering the final table as one of the short stacks.

“There are no regrets on anything that’s for sure, in terms of the pots I won and lost. Sometimes you can make the best decision and it doesn’t work out and that’s an awesome lesson that poker teaches.”

Su soaked up the moment and lived within it, overwhelmed by the support of his friends and family. When he looks into the future he’s unsure whether he’ll play a lot more poker than he currently does, as his job as a software engineer and his other big passion, music, take up a lot of time.

“Once you’ve chosen to play poker, winning and losing is just part of the game. Whether you’re the best player in the world or the worst player, there is a lot of luck involved so you’re bound to sometimes just lose so it doesn’t really bother me knowing that it’s a possible and also likely outcome that people might just underestimate.”