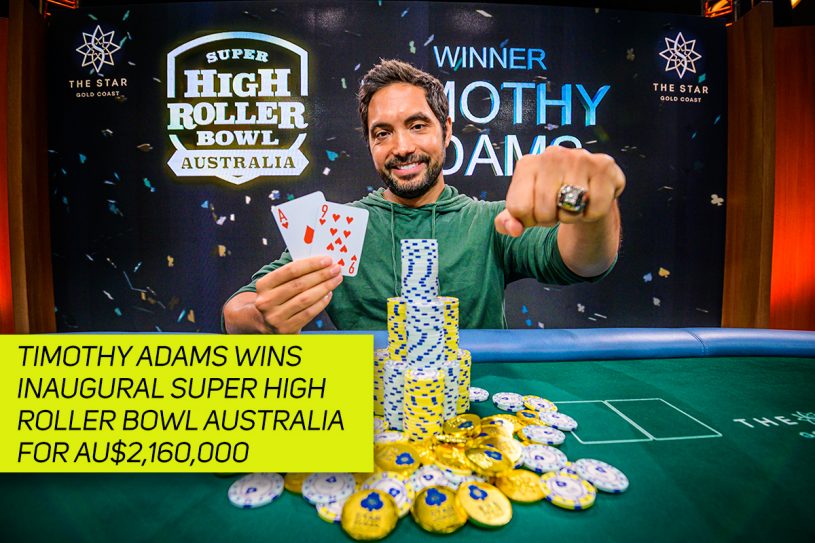 “There is a ton of prestige to winning a tournament like this,” Adams said. “It makes it extra nice and I’m really pleased right now.”

Adams has been a regular on the high roller circuit for multiple years, and his lifetime tournament earnings now sit at over $20.6 million which moves him to 26th on the All-Time Money List ahead of Spain’s Adrian Mateos.

“Ultimately, my goal is just to win money and set myself up for my future,” Adams said as he reflected on his place on the All-Time Money List. “If you’re doing well on the All-Time Money List it might correlate to having more money. With big buy-ins, come big cashes, so a lot of that can be misleading. I’m happy to make as much as I can, and then at the same time move up leaderboards. My main focus is to make money.”

“This one feels really special,” Adams said about becoming a Super High Roller Bowl champion. “The buy-in is very big and the field is very tough. There were a lot of elite players in the field, and yeah it was a small field, but winning any tournament always feels great especially when you beat tough competition. It’s extra satisfying.”

With Day 1 action of the inaugural Super High Roller Bowl Australia seeing the 16-entrant field reduced down to the final five players, those players returned to The Star Gold Coast poker room to battle it out under the bright lights of the PokerGO feature table.

Elio Fox held a commanding lead with roughly a third of the chips in play. But unfortunately for Fox, things wouldn’t go his way once play resumed. Burns opened the button holding

and Fox three-bet the big blind with

. Burns called, and then called a bet on the flop and turn as the final board read

. On the river, Fox bet roughly a third of the pot, and after using three-time extensions, Burns called with ace-high to move into the big chip lead.

Just a few hands later, Fox called a raise from the big blind holding a pair of sevens to be again against Burns on the button. Fox check-called a flop bet and then turned a set and check-called another bet. The river brought a four-card straight and Burns moved all in. Fox used five time-extensions and then called all-in with his set. Burns, however, had gone runner-runner to make the nut straight holding ten-nine, and Fox was eliminated in fifth place.

Aaron Van Blarcum hadn’t gained any momentum at the final table, and after turning two pair when Burns turned a flush, Van Blarcum was down to 15 big blinds. Shortly after, Van Blarcum took a stand from the small blind with his 10 big blind stack and was up against Burns’ pocket nines. No help came for Van Blarcum, and the recent WPT Legends of Poker champion would be eliminated on the money bubble.

Entering three-handed play with each player guaranteed AU$640,000, Burns held the chip lead with 2.5 million to Adams’ 1.1 million, and Super High Roller Bowl London champion Katz’s 386,000. Katz managed to find a double with pocket sevens against Burns’ king-queen, but Katz’s fight would end in third place when he called off his 11 big blind stack with king-deuce from the big blind to be ahead of Adams’ ten-eight from the small blind. The window card was a ten, and although Katz turned a gutshot to go along with his king-outs, he would eventually be eliminated in third place for an AU$640,000 payday.

Burns entered heads-up play with 2.9 million in chips to Adams’ 1.1 million, but immediately it would be Adams closing the gap. On a final board of

, Burns would check his

before Adams shoved all in for just over pot holding

Adams then turned a flush holding his nine-three suited and managed to find a fold from Burns had a straight draw and ace-high. After some back-and-forth, Adams would find a huge double when he called a three-bet holding ace-ten suited against Burns’ king-queen suited. Adams flopped a flush draw and called a continuation-bet, and when the turn gave Adams the flush and Burns top pair, both players checked. The river improved Burns to two pair and led out for just under pot. Adams moved all in, and after using several time extensions, Burns called and was shown the bad news to be left with just nine big blinds.

Burns managed a double with a suited-ace against Adams’ jack-ten, and then another when he held with top pair. But the final blow would come when Adams raised his button with a suited-ace-nine and Burns shoved the same-suited queen-jack for roughly 28 big blinds. Adams called, and when the flop brought an ace and improved Adams to two pair on the turn, Burns would be eliminated in second place for a AU$1,200,000 payday.

To relive all the Australian Poker Open and Super High Roller Bowl Australia action, make sure to head to PokerGO. Subscribe right now and never miss another final table stream with some of the best of the best from around the world.