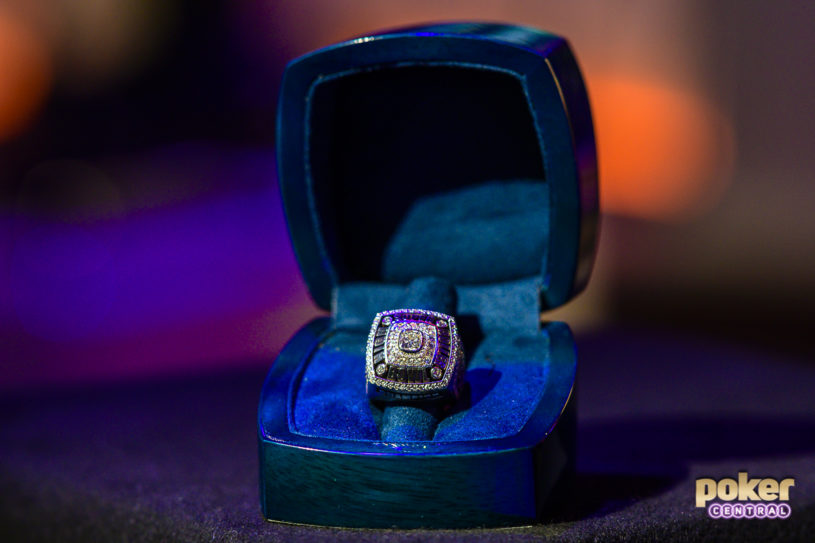 The Championship Ring along with $3.6 million awaits the winner today!

The stage is set for an epic finale to 2018 with the final table of Super High Roller Bowl V! With just seven players remaining it’s Stephen Chidwick who leads a stacked field in which he’ll be going up against players such as Alex Foxen and Ali Imsirovic. These three names have been mentioned on an almost weekly basis throughout this year as they are all amidst the best year’s of their career with a chance to cap it off with their biggest win ever.

Watch the final table live on PokerGO starting at 5:00 pm ET. New to PokerGO? Subscribe right now. Read the updates on the Poker Central Live Reporting along with your PokerGO stream.

Here’s a look at the final table seating and chip counts.

Prior to the final table, we caught up with the three 2018 headliners, and here’s what they had to say on having a chance to add another $3.6 million to their stellar years.

Notable 2018 stats and results: 2018 has been Chidwick’s biggest year by a wide margin, cashing for $8.6 million to date, placing him 7th on this year’s money list. Chidwick won the inaugural U.S. Poker Open Championship in February where he took down two events and made five final tables. In 2018 alone, Chidwick has three seven-figure career results that all came in this year. The UK pro sits third on the overall GPI standings and fourth on the Player of the Year race.

“It means a whole lot having a chance to win this one today. I’ve had really good results in $25,000 events but the best I’ve done in $100,000 events or bigger is a second place. It would be really cool to finish an amazing year with a big score.”

About his opposition, Chidwick said, “I’ve played against all of these guys a bunch and I’m good friends with most of them. I’m just looking forward to a really exciting day of poker, I’m sure I’ll be put in some really tough spots and I hope that I can make some good decisions in them.”

Notable 2018 stats and results: Alex Foxen ranks 1st on the Player of the Year ranking as well as the overall GPI standings. To date, Foxen has cashed for $4.4 million this calendar year, recording 11 six-figure results of which six were outright wins.

“It would be pretty ridiculous to win today and I’m very excited about the opportunity. It’s a tough final table with a lot of chips in play so it’s going to be a long day.”

“Nothing is really too out of the ordinary about this final table, the only player I don’t have much experience playing against is Talal. I’ve spent a lot of time at the tables with all these players.”

“Becoming number one on the GPI and winning Player of the Year was definitely a goal of mine, it feels really good having done it. This one would be a nice way to end it.”

Notable 2018 stats and results: Prior to 2018, Imsirovic had just $245,000 in live tournament results and he added $2.6 million to that to date. Imsirovic burst onto the scene by winning back-to-back Poker Masters events on his way to capturing the Purple Jacket.

“This tournament has been a lot tougher because we were a lot deeper. Players were making a lot of very creative plays and applying lots of pressure. It’s been very tough.”

“I think I’ll have some jitters at the final table but hopefully, those will calm down. I haven’t thought about what it would mean to win the Poker Masters and Super High Roller Bowl in one year, but that would be pretty prestigious I think!”

Imsirovic has his parents in attendance at the final table tomorrow, and while it adds a bit of extra pressure, he’s excited to perform well in front of them.

Poker Central will have live updates that are in line with the live stream. You can watch the action on your PokerGO account.