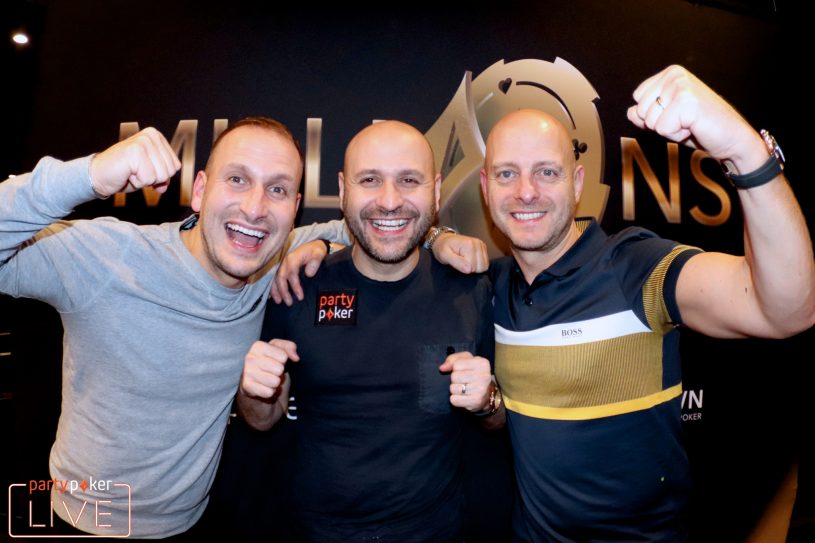 Roberto Romanello (center) and his brothers Anthony and Nicholas made it to Day 3 (photo: Mickey May/partypoker)

Day 2 of the partypoker LIVE $10,300 MILLIONS UK Main Event came to a dramatic conclusion today with the bursting of the bubble, locking up a seat in Day 3 for the sixty players who’d battled successfully through seventeen hour-long levels at Dusk Till Dawn. Together with the sixteen online Day 2 survivors, these players are now guaranteed a share in the $5,141,000 total prize pool.

On Day 2 the payouts for this event were also announced with the winner receiving a whopping $1,000,000 and the top 76 players will get paid at least $20,000. Check out the full payout table here.

With just 76 players remaining, the field is packed with raw poker talent and some of the most entertaining players in the game, promising thrilling PokerGO live stream and Poker Central Live Updates action tomorrow.

Day 2 of the prestigious event started with late registration open for the first two levels. It was soon clear to everyone that the guaranteed prize pool of $5,000,000 would easily be met as players (re)entered and the online players were added, making for a total of 530 entries when the registration desk closed.

The day started out with a tough fold for Kristen Bicknell where she bet a large portion of her stack on the river only to see Dara O’Kearney shove. Bicknell tanked for a bit, eventually implying she folded a full house. Bicknell was left short after that, busted, reentered, and busted again before the money. O’Kearney had a sizable stack after that hand, lost a bunch, but made it through to Day 3 with 3.5 million in chips.

Ben Heath won quads over quads but barely blinked an eye. In the end, it didn’t help him as he didn’t make it into the money. Neither did the bad boy of poker, Luke Schwartz, who was already halfway out of the door by the time his cards needed to be shown. Schwartz’s ace-ten high was no good against pocket nines and ace-king.

Another player to bust before the money was partypoker pro Joao Simao. Simao battled it out with Sam Grafton all day with the latter getting the best of it more than once. A couple of spots before the money, Simao and Grafton got it in with ace-king for the former against the aces of the latter. Grafton’s aces held up in a pot worth 18 million making him chip leader. Grafton didn’t hold on to all of those chips – most notably bluffing all three streets against a sticky Fredrik Andersson – but did make it through to Day 3 with a very healthy stack of 13 million.

When the bubble loomed, play tightened up a bit but the final two players to go out before the money weren’t short stacks by any means. Andrew Graham didn’t believe his opponent with top-pair on a four-to-a-straight board. Unfortunately for Graham, his opponent did have Broadway and Graham hit the rail in 62nd place.

Down to the actual bubble, numerous short stacks eyed the blinds to see how long they could last. They ended up not having to worry too much as Kuljindur Sidhu got into it with Peter Chien in a 20 million pot. Sidhu three-bet pre-flop and bet all three streets not having connected with the board in any significant way by the time the river was out. On the last card, with four to a straight and a paired board showing, Sidhu pulled the trigger and shoved. Chien didn’t believe his opponent and called with kings.

With the elimination of Sidhu, the sixty players in the Dusk Till Dawn poker room were in the money. They will be joined by the sixteen online players on Day 3 of the partypoker MILLIONS UK Main Event in Nottingham. Play restarts at noon when the gigantic prize pool will start to be paid with the first elimination. Everyone left, however, will be looking towards making Sunday’s final table with a shot at the life-changing sums of money that await the top Main Event finishers.

The live stream begins at 1 pm local time (8 am ET) and from that point, live coverage will keep in time with the delayed feed.