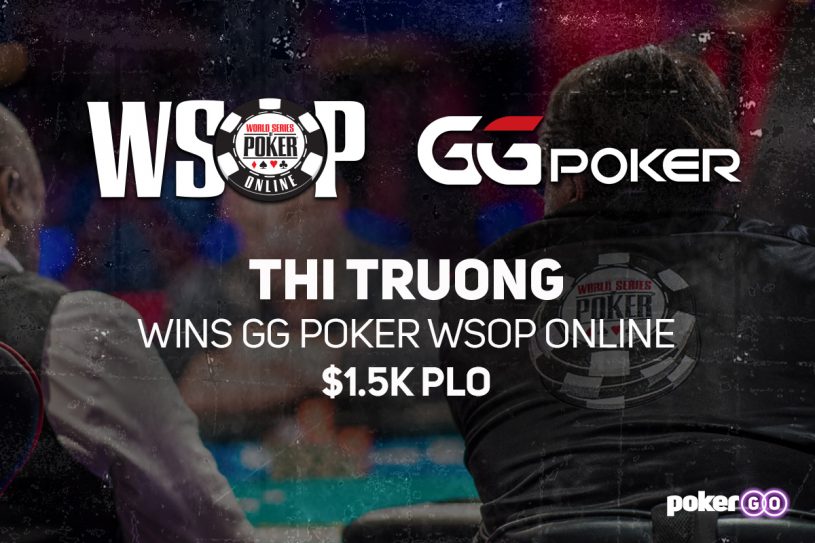 The 2020 World Series of Poker Online on GGPoker continued on Thursday with Event #74: $1,500 Pot-Limit Omaha attracting a 972-entrant field which created a prize pool of $1,385,100. Enrico Camosci would be denied a second bracelet of the series as Thi Truong emerged victorious to win the $215,938 first-place prize, an added WSOP Europe package, and his first WSOP bracelet.

Truong entered the final table as chip leader, and immediately extended his lead when he eliminated Johannes Toebbe in ninth-place. Sean Winter would be on the losing end of the biggest pot of the tournament at the time when he ran his kings into the aces of Dante Goya. Winter flopped a straight draw but couldn’t improve any further and fell in eighth-place. Frank Crivello exited next in seventh when he was all-in with an overpair but was up against the flopped set of Truong and never improved. Kyle Bowker was eliminated in sixth-place after he ran into the aces of Joao Simao as Laurynas Levinskas exited in fifth when he couldn’t outdraw the double-suited kings of Camosci.

After some back-and-forth between the final four, Simao fell at the hands of Truong who made a pair of sevens to pip Simao’s pair of sixes. Goya then was eliminated in third-place when his Truong turned the nut straight as Goya couldn’t improve to a full house on the river. Truong entered heads-up play with a two-to-one chip lead over Camosci who was chasing his second WSOP bracelet of the series. Unfortunately for Camosci, his run would come to an end when he was all-in with a wrap against Truong’s two pair. The river bricked out, and Truong was crowned the Event #74 champion.