You are here
Home > News > The WSOP Player of the Year Race Heats Up! Hui, Deeb & Clements Chase Zack 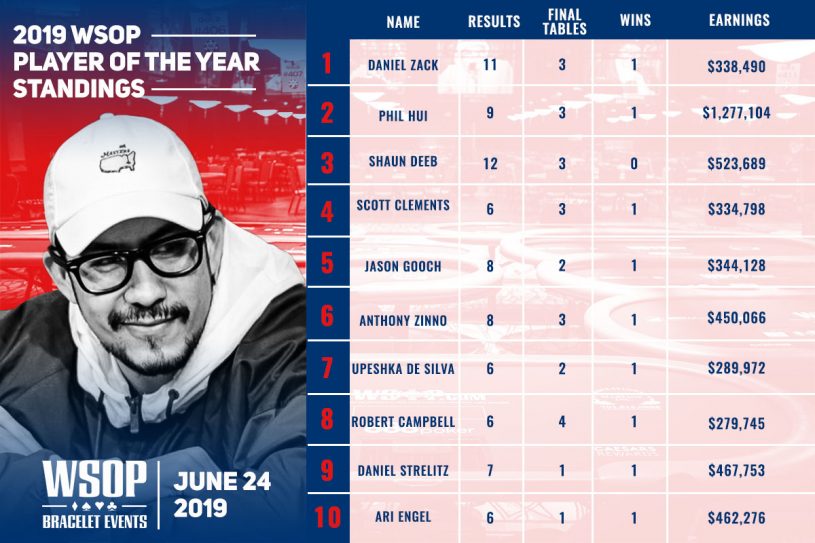 The WSOP Main Event is right around the corner and Dan Zack’s strong summer campaign continues as he maintains the lead among a flurry of big results from other contenders! Phil Hui, the winner of the $50,000 Poker Players Championship, jumps into second place while the fifth-place finisher, Shaun Deeb, slides into third.

A week ago, Scott Clement’s point total that put him in third place right now is not enough to be 13th! Points are flying and the Player of the Year race has never been more intense! Clements, however, only dropped one spot by adding a whopping 500 points to his total in the last few days. Anthony Zinno, who welcomed another bracelet into his life this week, jumps into sixth place while Ari Engel just barely holds onto a spot in the Top 10 for now.

Contenders Outside of the Top 10

The spots in the Top 10 are hard to grab a hold off but Jon Turner’s remarkable summer so far has him slotted in 11th place. Daniel Negreanu sits in 12th followed by Ismael Bojang and further down the list we see Loren Klein (18th), Ben Yu (19th) and Jake Schwartz (25th).

Want to keep track of all that’s good in the World Series of Poker Player of the Year race? Stay tuned to Poker Central for more coverage and watch all the action on PokerGO and CBS All Access.