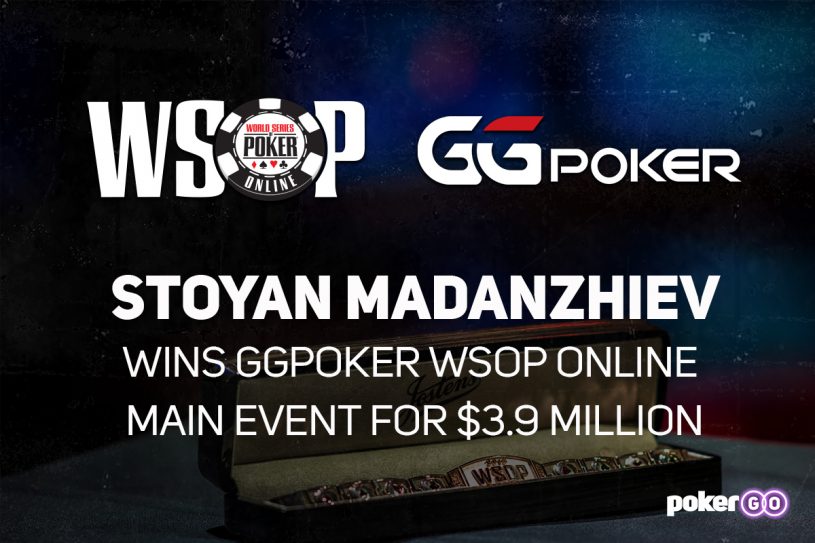 The 2020 World Series of Poker Online on GGPoker continued on Saturday with the conclusion of Event #77: $5,000 Main Event that was down to the final 38 players from the 5,802-entrant field. Bulgarian Stoyan Madanzhiev would defeat China’s Wenling Gao heads-up to capture his first WSOP bracelet and the $3,904,686 first-place prize.

Following 16 starting flights and a 12-hour Day 2, the field would be reduced to 38 players returning to the final day of play with American Bryan Piccioli holding the chip lead. Piccioli would be looking to surpass his 2017 WSOP Main Event finish of sixth-place, but would have to contend with other notable players such as Arkadiy Tsinis, Stefan Schillhabel, Benjamin Rolle, Jonas Lauck, Tyler Cornell, and Michael Lech.

The 38 returning players were all guaranteed $39,214 in prize money, and once play kicked off there would be a steady stream of eliminations as Tsinis (37th), Lauck (34th), and Lech (31st) were all out by the second break, and by the third one came around, Piccioli had dropped in the standings as Madanzhiev sat with nearly double his closest rival in Rolle.

Within back-to-back hands, Piccioli would find himself on the rail in 23rd place after firstly running top two pair into a flush, and then on the second seeing his ace-seven unable to outdraw Rolle’s ace-queen. It would take another two hours of play before the final table was reached with Tyler Rueger holding the slight lead ahead of Madanzhiev.

Samuel Taylor would be eliminated within the first few hands after flopping a set of nines but would be up against Wenling Gao’s turned set of aces. All the money went in on the river, and as Taylor exited in ninth, Gao was contending for the chip lead. Cornell would exit in eighth after his ace-jack was outdrawn by Rueger’s queen-jack when a queen fell on the flop. Schillhabel would have to settle for seventh when he was all in with pocket tens but lost a race to Gao’s ace-king.

Brazilian Joao Santos would fall in sixth when his ace-deuce couldn’t improve against Rueger’s ace-king, while Satoshi Isomae was eliminated in fifth after bluffing all-in on the river with ace-high only to be picked off by Madanzhiev and his two pair. Thomas Ward was all-in holding pocket sixes against the pocket sevens of Gao, and when no help came, Ward headed to the rail in fourth place. Rueger found himself all in with ace-queen, but ran into the pocket kings of Gao. The eight-high board saw Rueger fall in third-place as Madanzhiev held a seven-big blind chip advantage entering heads-up play with Gao.

Heads-up play would be dominated by Madanzhiev as he continually furthered his advantage over Gao. The final hand would see Madanzhiev flop the nut straight against Gao’s pocket aces. Madanzhiev check-raised and Gao called, and when a brick landed on the turn, he check-raised once more. Gao responded with a three-bet shove all-in, and Madanzhiev snap-called to have Gao drawing dead and eliminated in second place.

Prior to winning the GGPoker WSOP Online Main Event for over $3.9 million, Madanzhiev had collected a handful of cashes around Europe, along with three cashes online during WSOP Online. Madanzhiev now becomes the fourth WSOP bracelet winner from Bulgaria joining Ognyan Dimov, Nick Jivkov, and Simeon Naydenov.

The final day of play of WSOP Online action will see a total of five WSOP bracelets awarded including the conclusion of Event #79: $25,00 Heads-Up No-Limit Hold’em [People’s Choice Event] where only four players remain including Fedor Holz and Sergi Reixach.