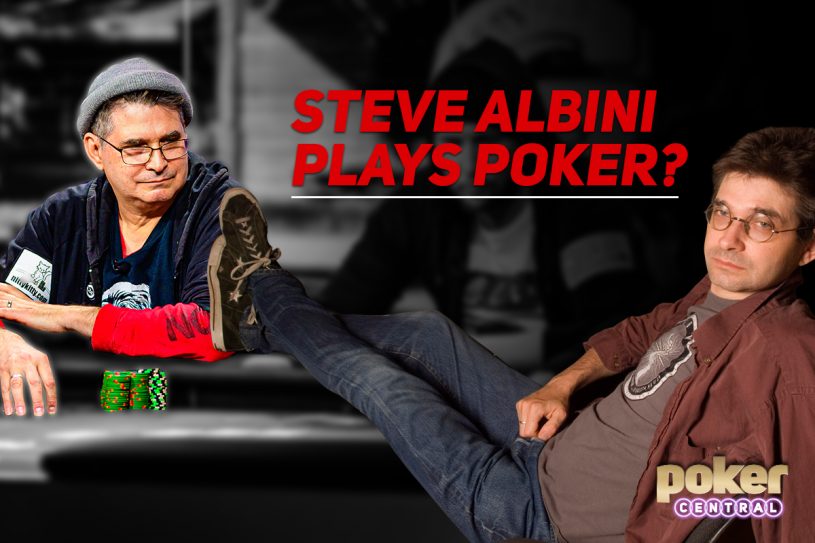 Steve Albini plays poker at the World Series of Poker and in his home game in Chicago. (Image: Poker Central/Getty)

If you know the name Steve Albini but you don’t recall where you know it from, then you might be forgiven if you associate him with something completely different from poker.

For many years, Steve Albini is a name that has been synonymous with the music industry, first as a singer and guitarist in bands such as Big Black, Flour and Shellac, then as a music producer for bands such as Nirvana, with Albini’s studio Electrical Audio a large complex of dedicated studio space in Chicago. The musician and music producer, is, however, a huge poker fan and player, even winning his first WSOP bracelet in 2018. Steve Albini plays poker? You bet he does!

THE MAN BEHIND THE MUSIC

The great gift of a musician whose success comes from so many different areas of the industry is discovering their sound, and Steve Albini is exactly the same. You’ve heard his work even if you didn’t know it was him, as he has been behind so much music that the man himself believes he’s worked on “several thousand” albums. He’s worked with some of the biggest bands in the world, but Steve Albini is best known for producing In Utero, one of Nirvana’s seminal works before the death of their lead singer, Kurt Cobain.

In Utero was Nirvana’s final studio album and Albini was personally requested to produce the album by Kurt Cobain due to the ‘raw’ sound that Albini had a reputation for helping to create, such as The Pixies’ Surfer Rosa (1988), which Cobain was known to be a huge fan of. Nirvana’s Nevermind may have been a commercial success, but Cobain – and the band – wanted a more visceral sound and got it with In Utero, with Albini choosing the studio, keeping the band isolated and producing the iconic work within just six days in what the band themselves called the easiest record they ever produced.

While Kurt Cobain’s tragic suicide would mean it was Nirvana’s last record, Albini’s contribution to music history was a creation that was “exactly the kind of record I would buy as a fan” in Cobain’s own words.

All the while, Albini combined a lifelong love of music with a fascination with the felt. Poker was a game he truly immersed himself in and the natural narrative that poker applied to his enjoyment of the game is clear in this famous ‘Stories from the Felt’ that Albini told us in this PokerGO exclusive.

In 2013, Albini took part in the WSOP Senior Championship, finishing in 12th place from 4,407 runners. Having cashed in his first World Series of Poker event in 2010, Albini had the bug and after his Seniors result, would cash in each of the subsequent World Series in Las Vegas, Nevada.

Steve Albini may have shown he had some poker talent, but he wanted to win a WSOP gold bracelet and his wish came true when he topped the 310-player field in the $1500-entry Seven-Card Stud event at 2018 World Series of Poker taking it down after outlasting Chris Ferguson (4th) and beating Jeff Lisandro heads-up to win a career-high score of $105,629.

You can read about how it all went down and Albini’s rock and roll reaction to that phenomenal result right here.

You’ll never have to miss the next WSOP winner or the story behind their success if you’re a subscriber to PokerGO. Sign up today and you’ll have 24/7 access to the best poker content the world has ever seen.