You are here
Home > News > Shot Clocks in Poker, Will it Fix or Break the Live Game Experience? 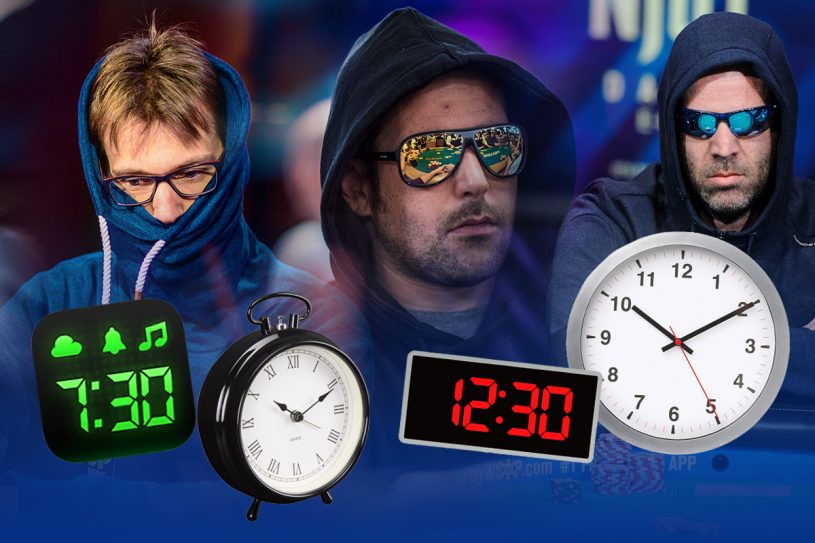 As poker moves towards an era where the shot clock is part of the landscape, we ask what the consequences might be for the game we all love. Will it slow down or speed up play? Which type of player benefits most from the tick-tock of a decision needing to be made?

What if… The Shot Clock was The Rule?

Poker has been slowing down for years is the argument. Once upon a three-bet, that was called slow-play, and it was no less respected as a style than safety play at the snooker table. In recent years, however, slow play has become synonymous with bad play and rudeness. Call it what you like, tanking has become a bugbear poker simply cannot stand to have at the table.

But should poker move on from an era where each man or woman has had as long as they needed to make a decision unless the clock was called? Going from unlimited time to time banks and shot and action clocks has many implications upon the modern game.

A NEED FOR SPEED

With shot clocks in place for every tournament, one group of people will be better off than ever before – shot clockmakers. But with players at every table timed, will they actually play faster poker? At an average bricks-and-mortar casino, you’ll play somewhere around 30 hands per hour. That’s two minutes per hand – sounds quick, right? But imagine if every hand took two minutes. It would be too short for many hands and far too long for others.

If one player raises and takes, while all the others at a nine-handed table use their shot clock before they fold, they’d take four minutes plus the time it took the aggressor to put in those extra chips. Even if we call it four minutes, that’s still double the average live poker hand length.

Would that be the case in reality, or would the speed increase, as it does online, where hands are on the virtual clock and players are forced to make quicker decisions for fear of losing their banked time?

Many professional players say that the game is simply too slow. And it is – for them. With shot clocks enforced as strictly as the rule employed by the Rio in Las Vegas that there should never be more than one gentleman’s restroom per three cubic miles, would a sense of fun be at risk too?

Recreational players play with aspiration, but they often play with perspiration, too. It’s about the flow of beer and conversation as much as it is about the game. They might find themselves in a timed tournament and not enjoy it, but they could always find somewhere to play poker where they weren’t being forced to make a decision in 30 seconds. With a total shot clock enforcement, they wouldn’t have that option and might disappear from the ecosystem entirely.

On the other hand, recreational players might love it. Playing more hands and not taking the game so seriously might include the thrill of playing poker on fast-forward. Providing players get to even a basic level of competency, the 30 seconds might prove just the right amount to keep the game more fun for everyone, not just the high stakes professionals.

SETTING OUT YOUR STALL

Even with shot clocks in play, stalling players can stall for 30 seconds every hand where once they might have been warned after a few hands of excessive fake-tanking. Tournament directors, hands tied by the demon clock, might find themselves going from table to table to enforce punishments and sorting out debates over whether a hand was called on the buzzer or after. Fine margins are there to be exploited, after all.

On the other hand, maybe stalling players would get bored of utilizing a rather petty tool to stretch out the game. Money bubbles (or the period before the bubble) slow down anyway, and the limit of 30 seconds might restrict the length of the delay and help the poker media cover the action, knowing they have exactly 30 seconds from the deal for each player in turn to make a decision.

So, how about we all agree to take our time when things get tough on the river but respect everyone’s time on prior non-tournament-life threatening decisions? There’s no exact science that can be applied to determine the long-term outcome of instating decision clocks to every tournament in an attempt to balance the stallers with the recreational players that might be off-put by their timing limitations, so why can’t we all agree to keep things reasonable to limit this problem and its ever-growing frustrations altogether?

With the shot clock bound to come into play before too long, you’ll never run out of time to catch up on the latest action from the purple felt at some of the hottest new tournaments in town. From Poker After Dark to the recent U.S. Poker Open, you can catch up on the latest PokerGO streams and classic archive footage by subscribing today. For round-the-clock poker documentaries, live events and classic World Series of Poker action, you can set your watch by us at Poker Central.