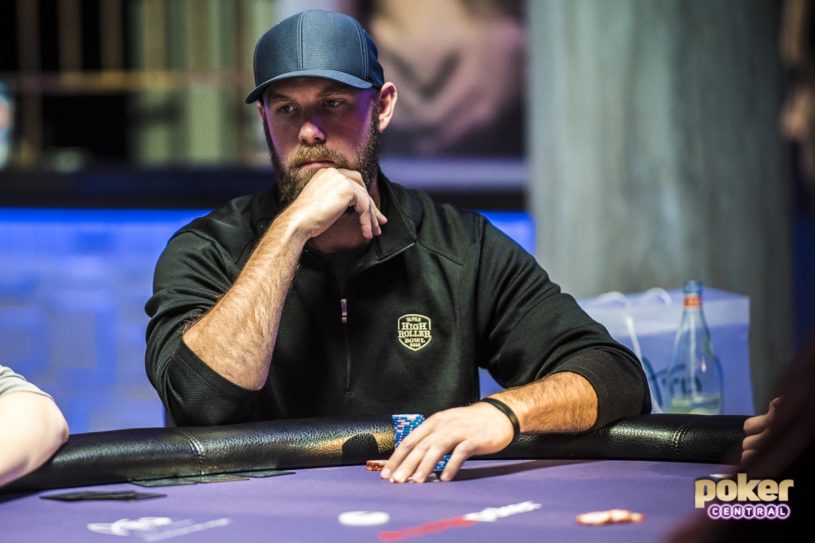 Seth Davies in action during the 2018 Super High Roller Bowl.

Earlier this year, the name Seth Davies got a huge boost after his appearance on INSIDERS on PokerGO where he was followed around by the cameras in his preparation for the Super High Roller Bowl along with Daniel Negreanu and Brandon Adams. On Monday, Davies will start another journey in this event as he looks to wash away the sour taste of finishing on the exact money bubble in May.

“I’ve got a lot more experience now and a lot less stress going into this thing,” Davies said the day prior to the start of the event.

“It’s still stressful, it being one of the biggest buy-ins of the year, but I’ve been there before and I’ve dealt with the most stressful result possible by finishing on the stone bubble. So yeah, I’m prepared for anything.”

In May, during Justin Bonomo’s unstoppable run, Davies finished in eighth place receiving $90,000, a min-cash created by three players dropping out and losing their $30,000 deposit. On his final hand, Davies ran pocket tens into the jacks of Jason Koon to turn him from a contender into a spectator.

Watch The Best of the 2018 Super High Roller Bowl right here on PokerGO.

“At the end of the day it’s just one poker tournament, but I do hope for a bit of redemption in this one. It could be over in five minutes though, or I could end up winning it,” were the sobering words Davies chose to describe his outlook on this coming week.

“I’m just here to focus on getting better at poker from event to event and I’m not taking this one any differently than any other tournament.”

Looking back on appearing on the PokerGO show INSIDERS, Davies admits that it brought a bit of extra pressure and exposure that he hadn’t previously anticipated.

“If nothing else, it let the people know that I was playing in the event and the casual fans might’ve had their eyes on me a bit more. Right now, there’s less pressure on me, fewer eyeballs, but the buy-in is the same so the stress is going to be there for sure.”

Having spent a lot of time playing, studying, analyzing and preparing for this event, Davies is ready to compete, and it became evident when asked whether he dreams about winning how much it would mean to him to be victorious in this event.

“Of course I dream about winning! That’s why we play!”

“When wins happen it’s really euphoric. We’re professionals and we do this professionally, but there’s very much that kind of euphoric gamblers edge part to it. It’s not like we’re chasing a high like degenerate gamblers, but it feels good to win and it’s something you always crave.”