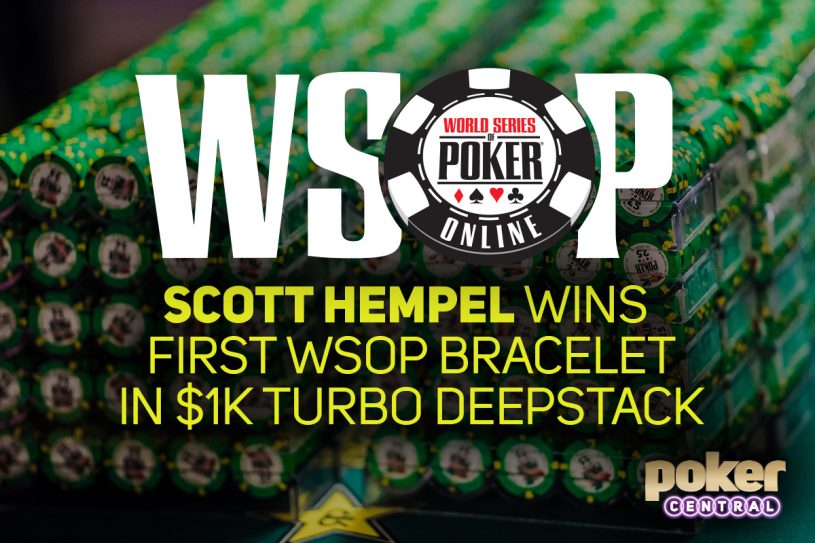 The 2020 World Series of Poker Online continued on Saturday with Event #18: $1,000 No-Limit Hold’em 8-Handed Turbo DeepStack would see a 987-entrant field create a $937,650 prize pool that paid the top 143 places. After seven hours of action on the virtual felt, Canadian Scott “BudLightLime” Hempel would top the mountain and collect the $181,060 first-place prize and his first WSOP bracelet.

WSOP bracelet winner Barry “puigmyfriend” Hutter entered the final table as chip leader before Matthew “EarvinMagic” Parry and Harrison “HarrisonD33” Dobin were the first two players to be eliminated. Landon “ActionDealer’ Tice would be eliminated in sixth place before Hutter fell in fifth place to Hempel. Hempel then sent Daniel “IntoTheRiver” Fischer to the rail in fourth when he made a flush, before the next hand saw him flop trips to eliminate Andrew “GoatMaster” Melillo in third to enter heads-up play with nearly a two-to-one advantage over Myles “Shipthemoney” Kotler.

Kotler managed to take the chip lead, but Hempel quickly wrestled it back before the final hand. Hempel shoved the button and Kotler called off roughly ten big blind with king-ten to be trailing Hempel’s pocket tens. The board blanked out and Hempel was crowned the Event #18 champion.

After finishing seventh in Event #17 for $22,250, Hempel broke through to capture the win and his first WSOP bracelet. Hempel is also one of the final six players at the Season XVIII WPT L.A. Poker Classic final table that was set to conclude in April at the HyperX Esports Arena at the Luxor Hotel & Casino in Las Vegas. However, with the conclusion of the final table currently on hiatus, he has been fortunate enough to add a WSOP bracelet to his poker resume while knowing he has a chance at winning the $1,015,000 first-place prize when the WPT L.A. Poker Classic final table continues.

Robert “BustinBalls” Kuhn is leading on the back of his Event #3 win and eight cashes, while Michael “MiguelFiesta” Lech sits in third, and Ryan “Joeyisamush” Depaulo rounds out the top five. To view the full leaderboard, click here.