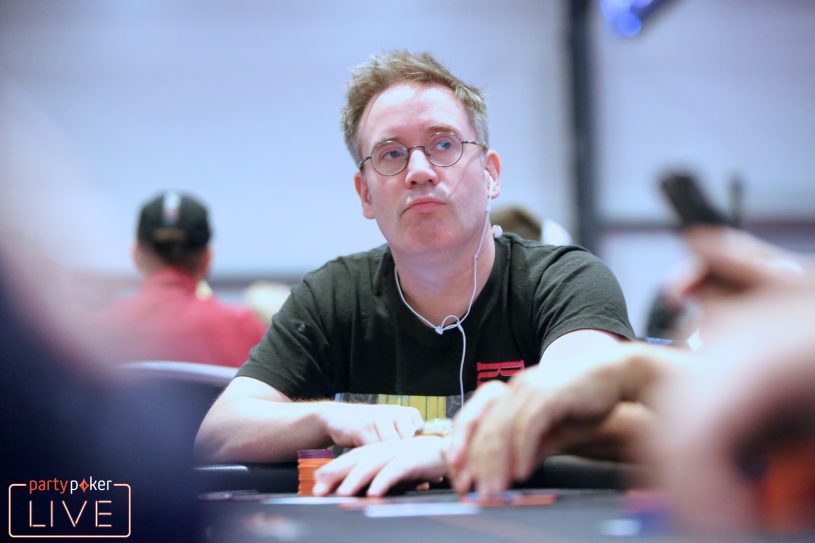 After a dramatic day at the Rozvadov felt, there were 57 players remaining in the partypoker LIVE MILLIONS Europe Main Event, with British pro Sam Grafton (26,950,000) leading the way from a field of talented players, such as nearest challenger, Hungarian player Jozsef Liszkovics (22,075,000) who battled for the chip lead in the room until the very last hand.

BIG FIELD CUT DOWN TO SIZE

With 160 players returning to Day 2 action after alk the Day 1s combined together, some late entries added themselves into the reckoning for a chunk of the €5,000,000 prizepool on offer at King’s Casino in Rozvadov.

With players such as the recent Super High Roller champion Michael Zhang (below) taking part, it was always going to be a day of massive action on the border between Germany and Czech Republic.

There were always going to be plenty of casualties on a day where the field was reduced from 160 hopefuls to 57 players who join the 15 online qualifiers to Day 3 at the live felt. One of the newest additions to the ever-growing partypoker Team Pro stable Bertrand ‘Elky’ Grospellier made Day 3 with 2,955,000  after eliminating friend and former MILLIONS Main Event winner Maria Lampropoulos.

Elsewhere, players such as Jack Sinclair (4,825,000) survived but will be looking to improve their stack early on Day 3, while Kenny Hallaert (18,050,000) can feel delighted with the stack he put into the bag.

It would be Sam Grafton who would grab the overnight lead, however, after a bombastic day at the felt. Pressure, isolating plays, three-bets, four-bets and a commanding control over the bubble period all contributed to a stunning eight hours of poker for Grafton, who accumulated dozens of pots to prevail rather than one big hand, suggesting he has it all in his tank to push for a big victory on Sunday night if he can maintain his level of play. Put simply, he was brilliant today and will be the player others hope to avoid when the table draw is revealed.

As the bubble approached, some players sat hunched over small stacks, while others defiantly faced down the possibility of leaving empty-handed when everyone else in seats would win. Charlie Carrel fitted into the second camp, moving all-in with pocket deuces only to be called and put at risk by German player Christian Willax, who called with ace-queen.

A safe board would double Carrel up, however, and after nearly doubling his 7 million chips after that hand across the remaining 90 minutes of the day, his late rush will leave the prince of the high rollers hoping for a deep run to go even further on Day 3.

The eventual ‘bubble boy’ would be another German player, however, in Mauricio Pais. Pais held queen-jack and was called by Mustafa Biz and Jozsef Liszkovics, who both held off suit ace-three as their hand, and saw that hold up, giving Liszkovics just a few million short of Sam Grafton’s stack as the final chip counts were tallied up.