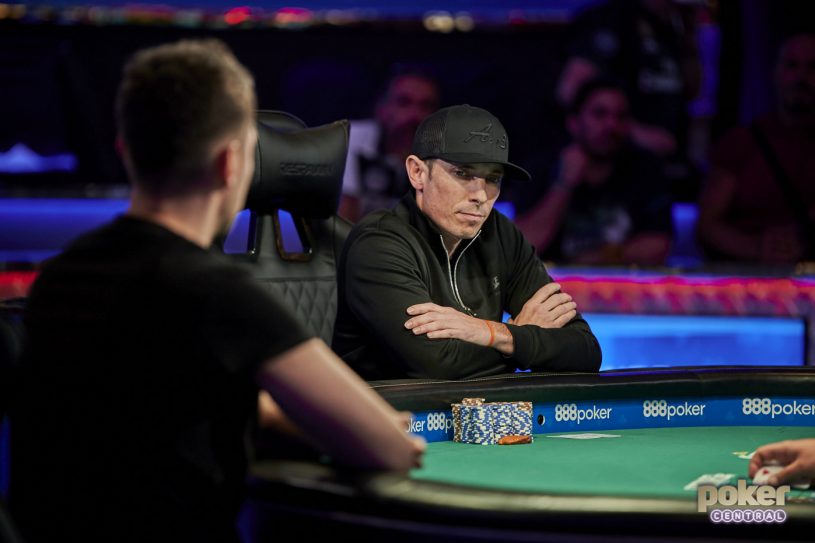 Robert Mitchell, pictured during his intense battle to become a WSOP bracelet winner.

Robert Mitchell won his first-ever WSOP bracelet after a mammoth day at the felt in the 37th event of this summer’s 2019 World Series of Poker.

By the time the dust had settled, Robert Mitchell’s at-times miraculous win in the $800 NLHE Deepstack event saw him bank the biggest poker score of his career, a whopping $297,537. The final table was a dramatic, at times like a rollercoaster and at others the kind of intense stare-down packed game of poker around which movies are based. Mitchell had an Italian and a Frenchman to beat when three-handed and saw the chips move around the table more like a roulette wheel than the poker felt, but rode his luck to come out on top.

As Alex Hallay, the French player who proved such a dogged opponent was busted, Marco Bognanni had the chip lead. But it would be Mitchell who wrestled it away from him and triumphed as, in the final hand, Bognanni committed fifty big blinds to an all-in four-bet with pocket treys. Mitchell, holding pocket aces, had the easiest call he’ll ever make, and dodged any sweats to ride those rockets home to the title. Upon victory, Mitchell was hoisted upon his friends’ shoulders, hailed the champion and presented with the gold WSOP bracelet.

Before winning the Deepstack event and going past half a million dollars in lifetime poker winnings in the process, Mitchell’s biggest cash was in the 2015 WSOP Main Event, finishing 52nd for $137,300 in the tournament every player dreams of winning. But he had already cashed three times in this year’s World Series of Poker alone, and after coming 59th in the $1,000 Super Turbo Bounty event for $3,354, 17th in the $1,500 NLHE Shootout for $5,279 and 100th in the $1,000 Double Stack event for $2,742, he won an altogether different sum of money in this event.

The money won’t change Robert Mitchell. That quarter-million dollar prize will be invested back into winning more this World Series, and maybe even a run at becoming the WSOP Player of the Year. That title would see him depicted on the walls of wherever the World Series of Poker pitches up each year indefinitely. But the bracelet means the world to the man based in Nevada who tonight made Vegas his own poker playground. Robert Mitchell, bracelet winner, will forever be how he’s introduced, and just maybe, how he introduces himself.