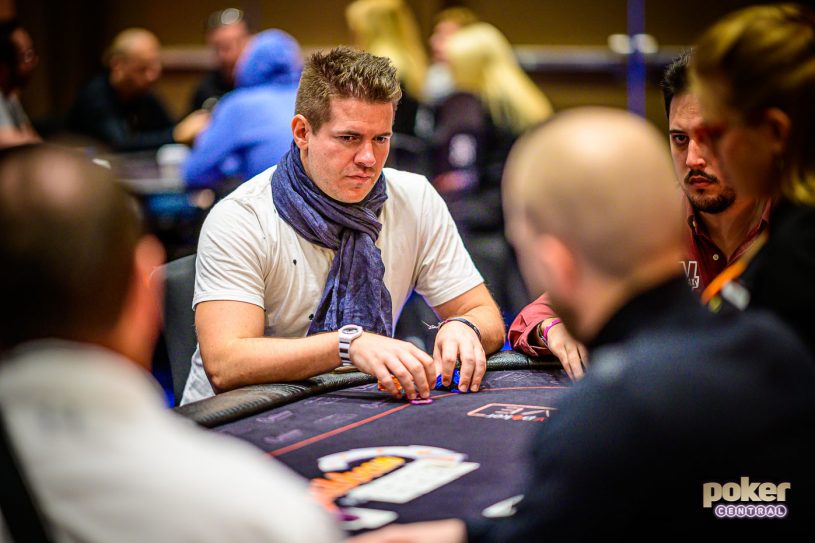 Marvin Rettenmaier among the big stacks surviving Day 1a of the partypoker UK Millions Main Event.

After eight levels of play, some massive stacks emerged with Mauricio Pais, Anton Johansson, and Philipp Zukernik collecting the most. Day 1a of the partypoker MILLIONS UK Main Event in the Dusk Till Dawn got underway at noon today with a total of 170 players entering and 87 advancing to the second day of play which will kick off on Friday.

Jiushuang Wang too had a great day, turning his million starting stack into 4.5 million, knocking out players left and right along the way. The biggest scalp came in a pot against partypoker PRO Roberto Romanello. While Romanello is, amongst other things, known for folding a full house in the WSOP Main Event a decade ago to the amazement of Mike Matusow, he wasn’t willing to repeat that feat here in Nottingham. He called with queens full of jacks, only to see Wang turn over queens full of kings on the river.

Wang is by no means the only one to multiply his stack. Such big names as Marvin Rettenmaier (3.8 million), Sam Grafton (2 million), November Niner Bryan Piccioli (3.1 million), and partypoker’s Joao Simao (3.5 million) all did well too.

Oliver Price was the first to head the tournament. Price’s surge came at the expense of bracelet winner Max Silver who suffered a bad beat with top-pair and top-kicker all in against Price’s flush draw on the turn. A heart on the river sealed Silver’s faith and catapulted Price to the role of chip leader. Price didn’t stay up top and lost a fair bit of chips back throughout the rest of the day, ending the eighth level with just over starting stack.

Day 2 sees the players return to action with blinds at 15,000 and 30,000. But before the 87 Day 1a survivors continue their quest for gold, first Day 1b will be played out on Thursday, January 9th. Players that busted on Day 1a today have another shot by handing over another $10,300 in exchange for a fresh 1,000,000 starting stack. Tomorrow’s stream on PokerGO will be a $100/$200 Pot Limit Omaha headlined by Rob Yong, Sam Trickett, Luke Schwartz, and Leon Tsoukernik and that stream gets underway wat 1:30pm ET. New to PokerGO? Subscribe right now.