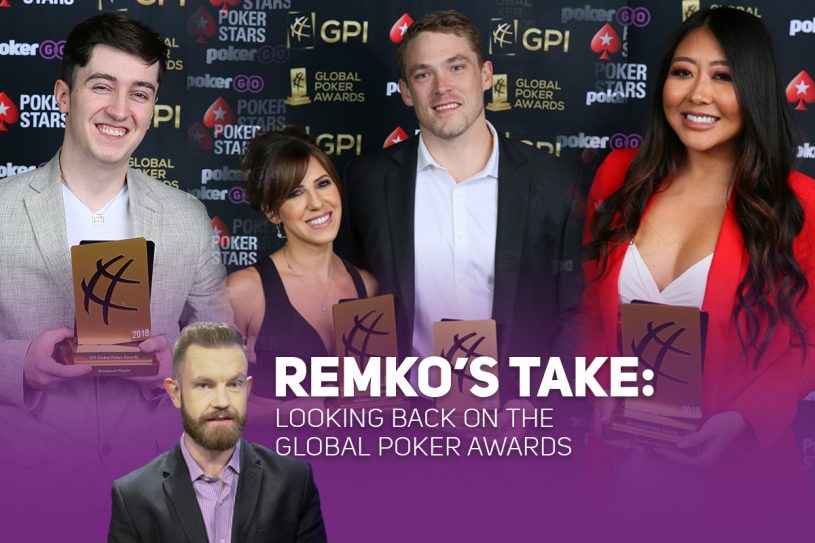 Looking back on the inaugural Global Poker Awards.

The Global Poker Awards took place on Friday night at the PokerGO Studio and fans, friends, and family were able to watch it all unfold live. Hosted by Ali Nejad and Drea Renee, the inaugural ceremony had players, media members, and industry personnel dressed in their Sunday best. Relive the Global Poker Awards on PokerGO right now.

While there was plenty of debate about both the award categories and nominees, the night itself turned into a fun gathering where the drinks were flowing and laughs were heard all around. It’s important for poker to have this annual celebration of its biggest names, events, and moments and I look forward to seeing which changes Eric Danis and his team has in mind for the 2019 edition.

For me, personally, I had hoped to perhaps come out on top in the category for “Podcast of the Year” with my good friend and colleague Brent Hanks, but the jury decided otherwise. As far as “Journalist of the Year” goes, Sarah Herring got snubbed far too many times in prior years and it was amazing to see how happy she was taking it home this year.

Moment of the Year

Looking back at the awards as a whole, there weren’t many big surprises but one of the ones I didn’t see coming was “Moment of the Year.” While Justin Bonomo had the most insane year in all of poker, I do believe that Jeremy Hilsercop’s moment truly defined how amazing this community can be.

Hilsercop was gifted a trip to Las Vegas by his wife Randi for Christmas, a bucket list type item for the lifelong poker fan. The video of this moment garnered nearly 400,000 views on Twitter alone and turned into him playing the PokerStars Poker Players Championship just a few weeks later after the involvement of Joey Ingram and Arlie Shaban.

This story captivated the poker world and those outside of it for weeks and it will always be something I look back on fondly. Doyle Brunson, who at the time announced that he had played his last WSOP event, has since gone back on his word because otherwise him playing his last ever WSOP event would’ve been quite the moment as well. Great nominees in this category all around and I’m excited to see what 2019 has in store for us.

John Cynn did indeed win the award for “Tournament Performance of the Year” and the tournament took down the “Event of the Year” award, which was followed by a passionate speech filled with gratitude and excitement from Jack Effel. It’s only right this event gets celebrated every year and my suggestions for next year would be to have two specific Main Event awards so other big events can get their place to shine. Specifically, “WSOP Moment of the Year” sounds like something that could create some buzz and debate.

This Could’ve Gone Either Way

Every year, there are quite a few categories that see many deserving people go up against each other. This year that was the case again in categories such as “Industry Person of the Year,” “Tournament Director of the Year,” “Mid-Major Tournament of the Year,” and “Broadcaster of the Year.” In my opinion, all winners this year in those categories are truly deserving as I tip my proverbial cap to Angelica Hael, Paul Campbell, Mari Ho, and all that are involved in putting together the RUNGOOD Poker Series.

And then there are a few categories left that I haven’t touched on. “Media Content of the Year” is a tough one for me because each one of the nominated items represents something I believe is very important for our industry. Drew Amato’s photography, and with that the excellent photography of all those that do this for a living, is something that deserves recognition while the same should be said for Hailey Hintze’s excellent reporting on the Gordon Vayo debacle, Lance Bradley writing a poker book that gives poker players a voice and a face for a wide audience while also documenting their stories in a lasting format that will be fun to look back on many years from now.

Lastly, and I realize that bias involved, I think that the PokerGO Original Series deserve all the credit for being unique, high quality and a refreshing type of content this industry needs to create new heroes, dive into the stories of the old heroes and make the fans feel more connected to the players they watch on TV all year round. Lance is a deserving winner in this category but in the future – and realize there are already tons of awards – I believe that “Photo of the Year” and “Original Content” should be in a category of their own.

And then there were those awards that didn’t have the traditional selection of nominees. Alex Foxen and Kristen Bicknell collected their “Player of the Year” honors while Chris Moorman was awarded with the PocketFives Legacy Award. Through a heartfelt speech by Mori Eskandani, Doyle Brunson received the “Lifetime Achievement Award” and our very own Drew Amato took home the Jury Prize for his excellent photography.

The Poker Personality of the Year was a four-man race between Lex Veldhuis, Johnny Vibes, Jonathan Little, and Brad Owen. The fan bases of all four were heavily involved in the voting process with Owen coming out on top. In his acceptance speech, Owen emphasized how everyone got everything wrong in the Vlogger of the Year category but he also showed a lot of gratitude to his fans for voting on him to win this award.

Lastly, Robbie Strazynski collected the award for Charitable Initiative of the Year, and while I want to celebrate all forms of charity in the game of poker, I think it’s an oversight not to give this award to Dan Smith. Don’t get me wrong, I love Robbie, his passion for the game and what he’s doing for charity, but there’s just no measure for what Dan Smith does with his charitable efforts every year.

All in all, the awards were great fun to attend and I hope the audience at home also enjoyed the show. There’s lots of work to be done to take the awards to a higher level next year but I’m convinced that all those involved will draw a lot of inspiration and energy from the show at the PokerGO Studio. Here’s a breakdown of all the awards with winners marked in bold.

New to PokerGO? Subscribe right now to watch all these big moments unfold live as well as an extensive on-demand library of content.