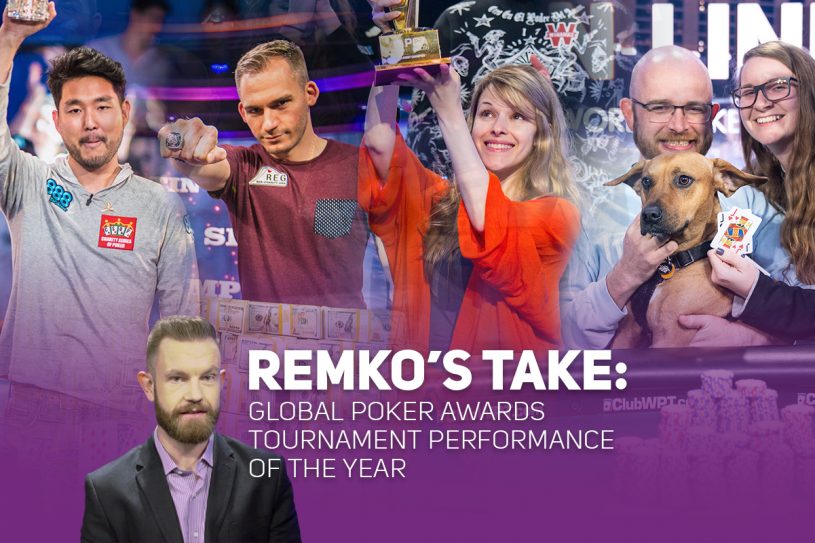 Remko Rinkema takes a look at the nominees for the Global Poker Awards for 2018 Tournament Performance of the Year.

Five days from now, the poker community will gather inside the PokerGO Studio for the inaugural Global Poker Awards. Between now and then, I will break down every category with a brief summary of the nominated players, moments, events, media members, and industry personnel.

After years of European and American Poker Awards, the Poker Awards were rebranded to include the entire world and give other events and people a chance to shine. While there’s lots of tweaking, adjusting, and revamping to be considered for future years of these awards – as has been discussed at large on social media – I’m still very excited to see who will get rewarded for their 2018 efforts.

2018 Tournament Performance of the Year

In this category, I see four very worthy nominees. One of the things I love about this category is that it makes me think back to some of these massive events and big moments for those individuals. I was fortunate in 2018 to be in attendance for three of the four nominees, so let’s break them down chronologically.

Maria Lampropoulos deserves all the praise. The Argentine pro notched up two seven-figure scores in big Main Events in both 2017 and 2018, the latter being the PCA win that she’s nominated for. Lampropouls defeated a field of 582 entries battling her way through an insane final table that included Shawn Buchanan, Koray Aldemir, and Adrian Mateos. Watch this final table on YouTube right here.

The man of 2018 is without a doubt, Justin Bonomo. Cashing for a record-breaking $25.4 million in one calendar year, Bonomo pushed the bar so high that this number might never be topped. Not only did he win the Super High Roller Bowl, but he also took down the Macau edition along with the Big One for One Drop. As far as “Tournament Performance of the Year” goes, his entire year should be considered for its own award as something that needs to be remembered as an epic feat.

A tradition that will likely never end, as the World Series of Poker Main Event winner should always be nominated for Tournament Performance of the Year. This event stands on its own, and in 2018 it was John Cynn’s turn to become very rich and very famous after the two-week poker marathon in Las Vegas. Cynn defeated a field of 7,874 and defeated the likes of Tony Miles, Michael Dyer and Joe Cada at the final table.

Dylan Linde is one of the most beloved and well-respected on the international tournament scene both live and online, and in December he finally managed to get the monkey off his back. Linde won the World Poker Tour Five Diamond Poker Classic Main Event beating a field of 1,001 entries to capture the first prize of $1.6 million. At the final table, Linde beat the likes of Barry Hutter, Lisa Hamilton, Ping Liu, Andrew Lichtenberger, and Milos Skrbic.

Let’s face it, we can give this award to the WSOP Main Event winner every year. This mammoth of a tournament always creates the largest buzz and excitement, and the 2018 edition was very exciting with an epic heads up between Tony Miles and John Cynn. The WSOP Main Event needs its own category and until then it’s very hard for me to not give its winner this award.

The final table last summer was riveting, Joe Cada’s improbable return to the final table was epic, Michael Dyer’s dominance was fascinating until it fell apart, and the cherry on top was the heads-up drama. John Cynn deserves this award because nothing can top the WSOP Main Event in my opinion.