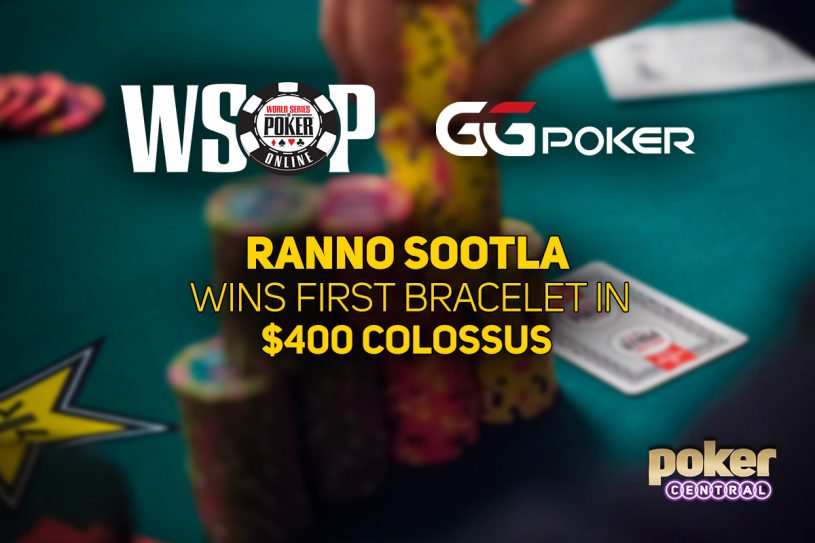 The 2020 World Series of Poker Online on GGPoker continued on Saturday with the conclusion of Event #41: $400 COLOSSUS that was down to the final table of nine players from the astonishing 12,757-entrant field. Estonian Ranno Sootla would defeat Greece’s Paraskevas Tsokaridis heads-up to capture his first WSOP bracelet and the $595,930 first-place prize.

After taking nearly a week-long break, the final nine players were all guaranteed $40,529 in prize money while all eyes were on the coveted WSOP bracelet $595,930 in first-place prize money that also has an added $15k WSOP Europe package. Immediately, Ajay Chabra would be dealt pocket kings and would be up against Paraskevas Tsokaridis’ ace-king. An ace on the river ended Chabra’s tournament, and Lai Sisheng would follow him out the door when his king-ten couldn’t win a race against Andre Figueiredo’s pocket nines. Tom Delaine would fall in seventh place when his ace-jack couldn’t improve against Joni Jouhkimainen‘s queens, while Agate Ose would exit next at the hands of chip leader Paraskevas Tsokaridis.

Although starting the day second in chips, Arunas Sapitavicius would exit in fifth place when his ace-three was unable to outdraw Tsokaridis’ ace-jack. Figueiredo would then commit with king-four suited an be unable to spike against Jouhkimainen’s pocket fours to fall in fourth place. Chips swirled between the three for a few orbits before Jouhkimainen’s tournament ended in third when his ace-four couldn’t outdraw Tsokaridis’ ace-queen. Tsokaridis entered heads-up play with Ranno Sootla holding slightly worse than a two-to-one chip lead. Sootla immediately began to close the gap before he took the lead and then worked on extending it. The final hand would see Tsokaridis limpshove all-in holding ace-nine from the button, but run head-first into Sootla’s pocket kings. Tsokaridis turned a straight draw, but wouldn’t be unable to find one of the three cards he needed on the river and bowed out in second place as Sootla was crowned the Event #41 champion.

Sootla becomes the first WSOP bracelet winner from Estonia and nearly doubles his lifetime tournament earnings – which sat at $613,989 – with his win in Event #41.