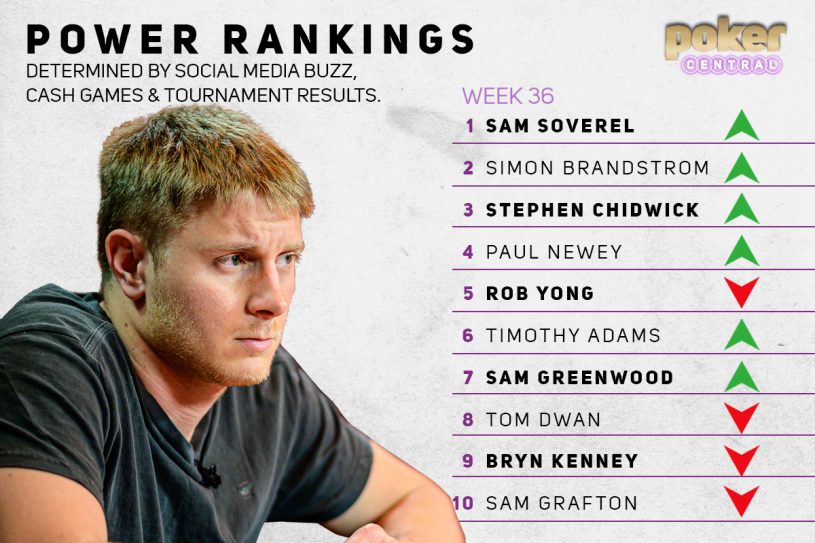 Sam Soverel takes the No. 1 spot on the power rankings for the very first time with his strong showing at the British Poker Open!

The Poker Central Power Rankings enjoyed two straight weeks of non-poker pro star power in the Top 10 with Paul Pierce and Gerard Pique but this week we’re back to a good old list of familiar names from the felt. The British Poker Open at Aspers Casino in London is in full swing while EPT Barcelona just wrapped up another majestic series to bring us to the following list that also includes the remnants of an epic two nights of Poker After Dark action. Let’s dive in!

For the first time at the top, Sam Soverel continues his title defense as High Roller of the Year with a tremendous showing in London. So far, Soverel has two second-place finishes to extend his lead on Ali Imsirovic, Stephen Chidwick, and Cary Katz and he also holds the championship lead for the British Poker Open.

Shout out to PokerStars for putting on another massive EPT Barcelona festival that drew players from all over the world. The massive Main Event had 1,988 entries and Sweden’s Simon Brandstrom took it down after beating Hungarian Marton Czuczor heads up. Brandstrom’s accomplishments to date included runner-up finishes in the Masters Classics of Poker, WPT Deepstacks Barcelona, and a third place in the EPT Prague Eureka Main Event.

In case you missed the #EPTBarcelona Main Event final table.
🇸🇪 @SimonBrandstrom took it down, winning €1,290,166
🇭🇺 Marton Czuczor is also a millionaire, collecting €1,253,234
🇪🇸 Main Event was biggest in EPT history, with 1,988 entries
🇨🇿 Next up, #EPTPrague, December 6-17 pic.twitter.com/GA9EXycdcU

After just one cash in his native United Kingdom in the last five years, Stephen Chidwick is on a six-cash streak in his home country combing the Triton High Roller Series with the British Poker Open. Chidwick made two BPO final tables so far as well as bubbling one of the events to put him in strong contention for the trophy. Chidwick is up to $11.5 million on the year to put him third on this year’s money list behind only Paul Phua and the untouchable Bryn Kenney.

He did it! After years of playing Paul Newey finally notched up a much-deserved win at the British Poker Open. Newey won Event #3 which you can read all about right here and for a feature interview with Top Dollar Man you can check out this piece. Newey won £156,400 for his efforts and remains 11th on the UK’s all-time money list.

After two weeks at the top, Rob Yong drops to No. 5 on the list after the GOAT Week on Poker After Dark buzz starts wearing off a bit. Yong’s idea for a massive cash game inside the PokerGO Studio is quickly turning into reality and this buzz might even carry him into the winter while being a part of the Top 10.

Is he the most underrated top pro in the world? Timothy Adams rarely plays in the United States these days despite winning a bracelet in the epic 4-handed tournament a few years ago but he’s making a lot of waves everywhere else. For now, Adams ranks seventh of this year’s money list and on the overall standings, the Canadian pro is now up to 31st after a strong showing in Barcelona. Adams has $17.8 million in live tournament earnings of which $7.6 million was collected this year. Let’s stop sleeping on Timothy!

He’s fourth on the 2019 GPI Player of the Year race and took down the British Poker Open Short Deck event today to put him seventh on the Power Rankings. Greenwood is amidst a career-best year as well with $7.5 million in earnings despite an epic WSOP Main Event bust out on Day 6 where he could’ve had the chip lead with 45 players remaining. Greenwood’s year is far from done and we might see him touch the No. 1 spot if he wins the British Poker Open.

After appearing on GOAT Week where he tangled with both Alan Keating and Rob Yong, Tom Dwan hopped on the Poker Central Podcast to talk about the Triton Million, high stakes cash games, and much more! Check out the full podcast in the link below.

What does the future of poker look like? 🤔@TomDwan joined the #PokerCentralPod to discuss where high stakes are headed.⬇️https://t.co/1KYHYbjPTk

It’s Bryn Kenney’s world and we’re just living in it! After winning the Triton Million, it’s locked in that Bryn Kenney will be the name that is forever associated with 2019 and for good reason. Kenney leads the year in total earnings, biggest result, and craziest lifestyle. From hopping around the world on private jets to throwing crazy parties, you just have to follow Bryn on Instagram to get the full experience. Oh, and when you’re rich they come to your apartment to shave and cut your hair!

It’s never boring when Sam ‘The Squid’ Grafton is around and his voice can be heard echoing through Aspers Casino during the British Poker Open. Like Greenwood, Adams, and Kenney before him, Grafton is also amidst a career year that could get even better with some nice scores in London.