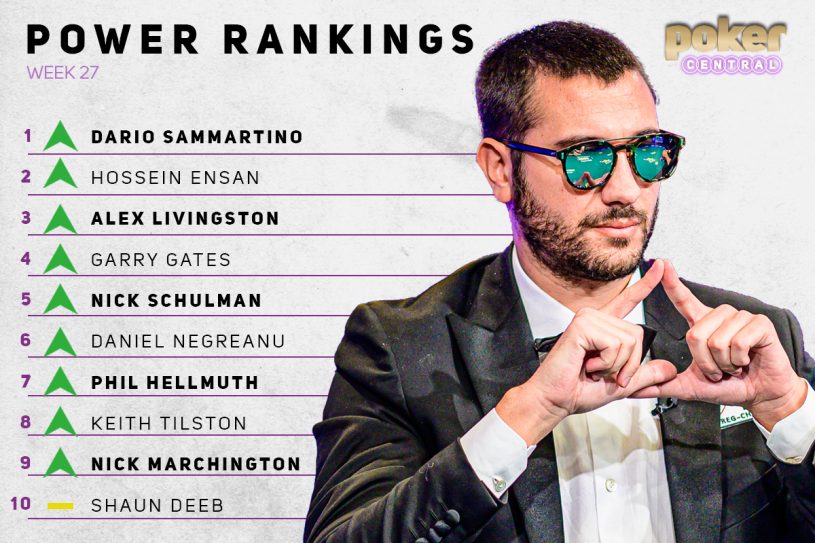 The Poker Central Power Rankings are dominated by the WSOP Main Event finalists headed up by Dario Sammartino.

If you’d asked me last week who would’ve been in the Power Rankings lead I would’ve, without a doubt, said: The Main Event winner. In a shocking turn of events, however, it’s the runner-up who grabbed the top spot as he struck a chord with the voting panel! Other names in the Top 10 are mostly Main Event or WSOP Player of the Year based, so let’s dig in!

He didn’t win the Main Event but his performance was definitely championship-worthy. Recording the biggest result for an Italian poker player ever, grabbing the No. 1 spot on its all-time money list and conducting the orchestra of rabid Italian fans on the rail, Sammartino is a worthy rankings leader as consolement for not winning the most coveted bracelet in the game.

🎶 “We will always stay with you, you can never give up, we have a dream in our hearts and we want you to become our champion!” 🎶

Dario Sammartino and the song that carried him through the Main Event final table. #WSOP50https://t.co/NZPxQVha0k

The champ is here! The champ is here! I’m pretty sure Ensan won’t be upset to lose out on the Power Rankings to his friend and rival Dario, as second is still great as well. Ensan became the second Main Event winner from Germany, taking home the biggest score ever for a Germany player and the honors of being world champion after Pius Heinz did it back in 2011.

The people’s champion of the 2019 World Series of Poker Main Event is without a doubt Garry Gates! The long-time media professional had an amazing rail both inside the Amazon room and on social media as he played his way into an incredible fourth-place finish for $3,000,000.

I'm not a big believer in karma but my god after so many years of putting up with every single high roller diva in poker my god @GarryGates deserved that ace on the river and 10 million dollars of poker player money that are going to follow!

Nick Schulman is a legend, won a WSOP bracelet in the $10,000 Pot Limit Omaha Eight-or-Better, played his heart out in the $100,000 High Roller where he finished third, and on top of that he was a hot item on Twitter the last two weeks.

Daniel Negreanu brought home the vegan bacon for his investors and rocked the WSOP Player of the Year standings by shooting up to the third place with a very strong showing. Across 17 cashes and three final tables, and more than $2 million in total earnings, Negreanu had a tremendous summer.

WSOP Package breakdown based on $100. Here is your return less fees:

Phil Hellmuth almost did the same thing he did last year during the Main Event! Hellmuth made the final table of the $5,000 Turbo that closed out the series while also providing analysis for the ESPN broadcast.

Having a blast at the @WSOP breakdesk with these two pros. Thanks for making my job easy, @MariaHo and birthday boy @phil_hellmuth pic.twitter.com/ukEVu31SNH

Keith Tilston shows up whenever the money gets big and this summer he won his first WSOP bracelet in the $100,000 when defeating Daniel Negreanu heads up.

The youngest ever seventh-place finisher in the WSOP Main Event is named Nick Marchington as he fell just short of winning it and shaving five months of Joe Cada’s record. Marchington was all class, played his heart out and had some great words to say about his experience.

Lastly, closing out the list this week is Shaun Deeb. Deeb had another crazy summer, falling just short of another bracelet win on numerous occasions. Deeb recorded 13 cashes made three final tables and cashed for $642k. Currently, Deeb is placed second on the WSOP Player of the Year race and looks to be headed to Rozvadov to lock up back-to-back POY wins.