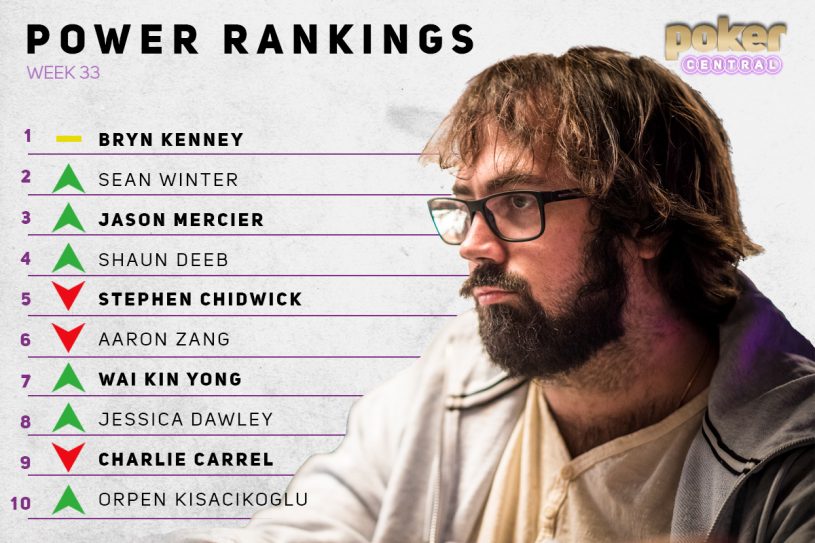 The Week 33 Power Rankings are here and Jason Mercier makes his debut in the Top 10.

The Triton Super High Roller Series is now more than a week into our rearview mirror but its ramifications on the Power Rankings are still very noticeable. Bryn Kenney remains up top, as he should, while the new names on the list come from one of two places: The Seminole Hard Rock Poker Open and the partypoker LIVE Millions Europe series.

What else is there to be said other than He’s No. 1 all-time. At this point, I don’t know what it would take for us to move Bryn down because this achievement needs to get as much love as it possibly can. So once again, Bryn Kenney is No. 1!

Hit number 1 winner all time yesterday. Always said I would hit it, follow your dreams and believe in yourself always

With a baby on the way Sean Winter took down a massive event this week to shove him into the second overall spot on the Power Rankings! This is for the first time since the U.S. Poker Open that Winter has made its way onto the list when he was in the Top 10 for five straight weeks, peaking at second overall as well. For his win, as you can see in the Tweet below, Winter collected nearly $700k to bring his total earnings to $13.6 million.

The 2019 #SHRPO concluded yesterday with @Nolez7 in the Championship winner's circle for $698K!

It was a massive two-week series with 27 trophy events and 30 players cashing for six figures. THANK YOU to every who played!

Daddy Mercier is back! Nearly a year after his last live tournament result, Mercier won the $50k Super High Roller at the Seminole Hard Rock Poker Open for $715k. Mercier followed that up with a 9th place finish in the $25k to firmly put his name back on the radar. It remains to be seen how often we’ll see Mercier on the felt as his wife Natasha is close to bringing their second child into this world!

ICYMI: On Friday, @JasonMercier won our biggest ever $50K Super High Roller in dominating fashion. After the win, he sat down with @MariaHo to talk about poker and the family life. #GOAThttps://t.co/V17Wf4u3GY

Shaun Deeb won the $25k at SHRPO for $778,300 beating a field of 115 entries for the biggest score of his year. Deeb now has $7.5 million in career tournament earnings despite not being a high roller regular.

Bonus #SHRPO news:@JohnnyBaxPoker won the $2,650 PLO tournament and @shaundeeb was there during a break from the High Roller.

The man who’s largely considered the best players in the world is remaining among the top players in the Power Rankings this week. Chidwick leads the GPI overall standings, remains third on the Player of the Year race and he’s coming off four final tables at the Triton Super High Roller Series.

The winner of the Triton Million drops from two to six and it might be a while before we see Aaron Zang back in action. No matter what happens though, Aaron Zang will, for now, be known as the winner of the biggest buy-in tournament in poker history!

Wai Kin Yong might need to start considering a rebrand to Wai “King” Yong after he’s continued a very strong year with some massive results at the Triton Super High Roller Series. Yong added two seven-figure scores to his resume for a total of $5.3 million after which he finished fourth in the partypoker LIVE Millions Europe Triton Super High Roller for $400k. Yong now has $10 million in career tournament earnings and is just $2.5 million behind his father Richard. On the all-time money list, Yong now ranks 87th, putting three players from Malaysia in the Top 100 after Paul Phua and his father. Learn more about Wai Kin in the video below.

Jessica Dawley jumps into the Top 10 of the Poker Central Power Rankings after she breached the $1 million earnings mark in live tournaments after winning $2,650 No Limit Hold’em event at the SHRPO series. Dawley collected $204,610 for her efforts after beating Faraz Jaka heads up.

The star of Charlie Carrel keeps rising as he had a blistering showing at the Triton Super High Roller Series where he notched up the biggest score of his career for $1.6 million. Carrel moved into third on the UK’s all-time money list with $8.7 million in total earnings as of right now and that puts him just shy of the Top 100 of the all-time money list in 102nd place.

It's by far the best series I've ever played. The setting, the fields, the people: all so well set up. Thanks guys <3 pic.twitter.com/Tg1WQodm0S

And then there is the man with the toughest last name in the game! Orpen Kisacikoglu took down the partypoker LIVE Millions Triton Super High Roller for a career-best €1,040,000 to put his name among an ever-growing list of players with a seven-figure score. Orpen’s showed to be a tough competitor for years now and this result will likely add even more fuel to his fire for many years to come.