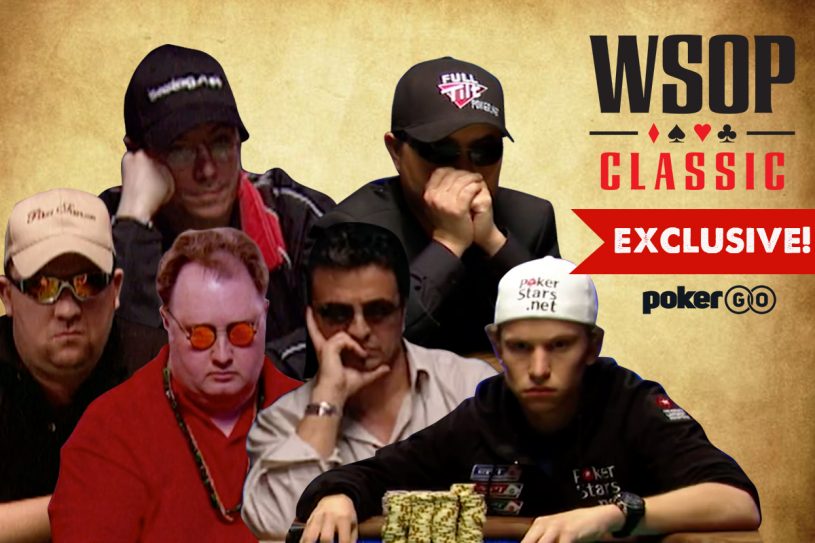 “WSOP Classic” will kick off today on PokerGO with footage from 2003’s WSOP Main Event. Day 1 of each year’s event will premiere on tonight with each tournament’s Final Table premiering on Friday night at 7pm ET. The series will highlight 7 years of WSOP Main Events in 7 weeks, focusing on a different year each week. Additional episodes of “WSOP Classic” will include iconic preliminary events from years past like Doyle Brunson’s 10th bracelet, a Phil Ivey bracelet in 2005, as well as the Poker Players Championship in 2007 and 2008, and the 2009 $40,000 40th Anniversary No Limit Hold’em Event, among others.

As an Independence Day weekend special, PokerGO will air the first-ever televised WSOP Main Event from 1973 on the Fourth of July followed by a throwback marathon on July 5th when the 1987, 1988, and 1989 WSOP Main Events will be broadcasted in succession featuring Johnny Chan’s epic back-to-back wins followed by Phil Hellmuth becoming the youngest WSOP Main Event champion in history, a record that would stand for nearly 20 years, winning in 1989 by defeating Johnny Chan heads-up.

“The World Series of Poker is a tournament with unmatched, electric energy that we celebrate annually across the globe with our community,” said J.R. McCabe, Chief Business Officer of Poker Central. “Since we are unable to partake in the live tournament as we usually would this summer, we decided to bring some of the most memorable games in WSOP history, many of which have not been available for broadcast since original airing, into the homes of fans and players alike.”

“WSOP Classic” will be the latest original series available exclusively through the PokerGO streaming service. From expert commentary on the game in “2020 Hindsight” and “The Championship Run,” to the tales of iconic moments in poker history in “Legends,” to behind-the-scenes interviews on “Hand Histories” and “Stories from the Felt,” PokerGO’s originals provide unmatched access to the world of poker.