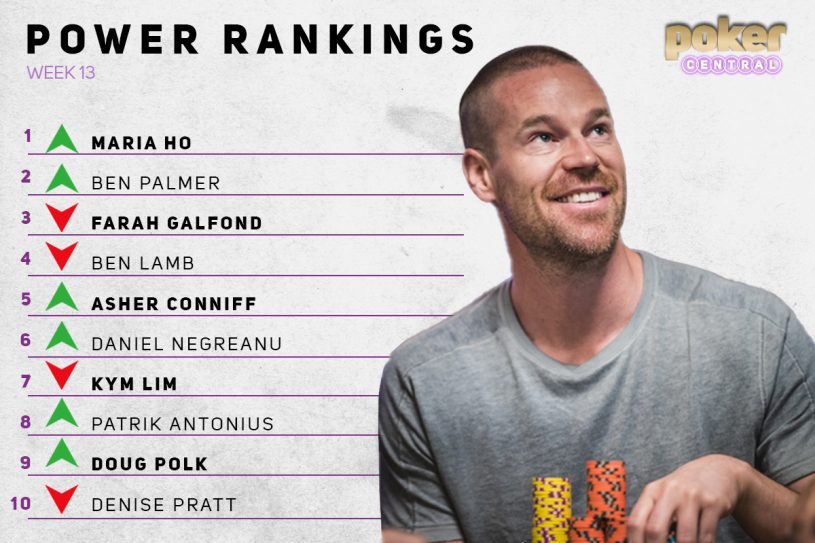 The week was quiet, very, very quiet! After Femme Fatale on Poker After Dark and tons of big live events wrapping up all over the world, we were in for a little lull in the action. Things are picking up again tonight with the Global Poker Awards and thrilling Poker After Dark Pot Limit Omaha action in the works, but until then, we had another list of rankings to compile.

Entering the Top 10 for the very first time today are two huge names: Doug Polk and Patrik Antonius. Maria Ho takes the top spot, however, as she takes the reigns from Farah Galfond. Asher Conniff also makes his debut on the list after taking down a WSOP circuit event during this slow week.

There it is! Maria Ho has taken the No. 1 spot as the voting panel narrowly pushed her into the lead as the Top 3 were separated by just 10 points. Ho has been ranked every week and remains a consistent factor in the Top 10 for many weeks to come as she’s one of the favorites to win a Global Poker Award at the PokerGO Studio on Friday night!

Winner winner, chicken dinner! Ben Palmer took down the WPT Venetian event to capture the biggest win of his career worth $431,655 and a seat into the $15,000 Baccarat Crystal Tournament of Champions in June!

Farah drops two spots on the rankings as her momentum from Femme Fatale II carries on along with an appearance on the Poker Central Podcast. Listen to the full podcast below.

You: "Televised poker is so serious, no one ever talks!"
Also you: "Too much talking, stick to the poker!"@Farah_Galfond:#PokerAfterDark https://t.co/5rUlItuiNK pic.twitter.com/Fon5gHZ7oT

The Uruguay gambling extravaganze featuring Ben Lamb, John Cynn, and Jonathan Depa carries weight into this week of the Power Rankings. I seriously think we could make a movie about this adventure, and it might take a few more years before all the juicy details will reach the surface. For those that missed the action, check out Lamb’s Tweets about this crazy streak.

WPT Champions Club member Asher Conniff took down a nice chunk of change this week by taking down the WSOP Circuit Main Event at Bally’s in Las Vegas for $193,147. This brings Conniff’s career tournament earnings up to $2.2 million and a nice Top 10 rankings here on Poker Central!

The poker community can be incredibly negative at times.. but when you win a tournament, the wave of support and love is really amazing and uplifting

The soon-to-be-married Daniel Negreanu stayed active on Twitter despite announcing that he would be taking it a bit easier on the social media streets! Negreanu appeared on Canada’s sports broadcast network where he was asked the following question:

Who's the best poker player in the NHL? 🃏

“If I don’t say my good buddy Phil Kessel, he’ll be really mad at me.” – @RealKidPoker 😂#IceSurfing pic.twitter.com/Y4CapkOk8J

I think Kym Lim is one of my new favorite players. Playing tremendous on Poker After Dark along with a witty and creative Twitter account, what else can a big poker fan ask for? Lym drops from five to seven but remains one of the most popular players right now!

Big stack both days but unfortunately today the chips all came from my purse and not from my opponents https://t.co/ntxZ40v5ub

Patrik Antonius hosted the first annual Patrik Antonius Poker Challenge in Tallinn, Estonia this week and we always love to see top players use their brand and resources to put on an event that brings poker players together. One of the players that made it out for this event was Dan ‘Jungleman’ Cates and the two poker superstars played plenty of massive pots to make for some entertaining live-streaming action.

Doug Polk was on fire this week on Twitter. Polk touched a variety of topics including weight loss, trading ethics, and some poker talk while also trolling us on April Fools with some nice new Upswing courses.

There’s nobody like Denise Pratt in poker! She joined us on the podcast last week, which you can listen to by subscribing to the Poker Central Podcast on your favorite podcasting app, and she dropped more expletives than Brent Hanks! Read all about her story in the article below or watch her in action on Poker After Dark on-demand.