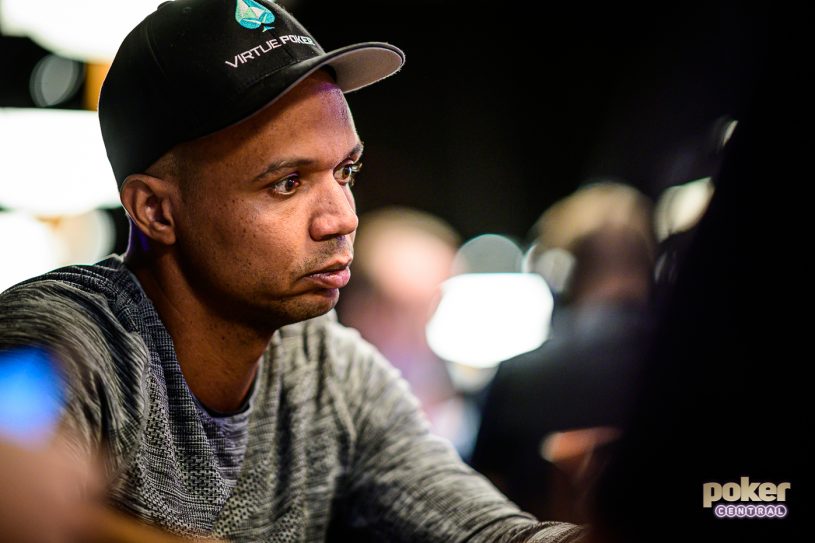 Phil Ivey during his first appearance at the 2019 World Series of Poker.

There’s no player in the world that’s more intriguing than Phil Ivey and his appearance at the 2019 World Series of Poker is therefore extremely newsworthy. Earlier this year, we speculated on whether Ivey would show up at all, and recent rumblings seemed to confirm his absence this summer. However, the rumblings were all wrong as the 10-time WSOP bracelet winner just showed up and took his seat in the $10,000 Omaha Eight-or-Better Split Champions event.

Ivey’s last tournament result dates back to last summer where he made the money in the Main Event, raking in a min-cash for finishing in 547th place. On his final hand, Ivey busted out in a memorable hand versus Brian Altman which you can relive right here.

Taking his seat in the Amazon Room, Ivey was placed with Phil Hellmuth, Shannon Shorr, Andrey Zaichenko, Matt Woodward, Dylan Linde, Mike Wattel, and John Racener. Registering late for this event, as he only showed up for Day 2, means that Ivey is just a full day of poker removed from getting a quick cash on the books.

To date, Ivey has 25 cashes in Omaha events, most notably a bracelet in both Pot Limit Omaha and Limit Omaha Eight-or-Better Split. Ivey’s first ever bracelet win was in 2000 when he beat Amarillo Slim heads-up in the $2,500 Pot Limit Omaha event, which turned out to be Slim’s last final table appearance ever.

Just a few weeks ago, Ivey released his Master Class where he teaches his poker skills, tells, and experiences in a similar fashion to how Daniel Negreanu did one last year. The Ivey news was so hot that he even got ranked in our very own Poker Central Power Rankings, to show that even the smallest news bit is easily trending in poker as Ivey’s name still carries so much weight.

Prior to the World Series of Poker we featured a variety of Phil Ivey content, hypothesizing about what could’ve been if he had won the 2009 WSOP Main Event, if he never got into gambling and focused only on poker, and whether or not he would break his No Limit Hold’em curse at the WSOP. Oh, and I joked about giving Ivey a birthday gift, entry into the Big 50, but he passed up on the chance.

Watch the 2019 World Series of Poker on CBS All Access and PokerGO and perhaps you will have a chance to see Phil Ivey battle for his 11th WSOP bracelet to break the tie with Johnny Chan and Doyle Brunson.