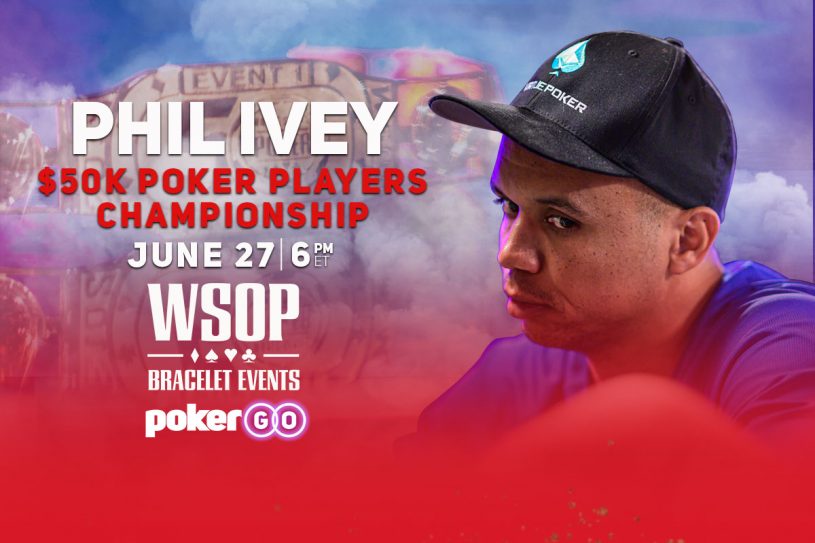 The GOAT is on PokerGO. (Photo: Poker Central)

Keep pace with the non-stop action and get in the game with Poker Central’s “PokerGO WSOP Daily Brief.” Each day, we’ll highlight World Series news, poker’s biggest names, upcoming live streams, and more. Follow along and watch the 2019 World Series of Poker on PokerGOand CBS All Access all summer long.

It has been a tumultuous five years since Phil Ivey last won World Series of Poker gold. There have been more no-shows than buy-ins during that span, but now, midway through the 50th annual World Series of Poker, Ivey has a chance at an 11th bracelet, the Chip Reese Memorial Trophy, and poker immortality.

Ivey holds the chip lead and headlines PokerGO’s Day 4 feature table coverage of the Poker Players Championship. A dozen players remain and while there are a few multiple bracelet winners within touching distance, what this event means to Ivey’s legacy can not be understated.

He’ll have to reach the final table for any of those narratives to materialize and PokerGO coverage of the $50,000 Poker Players Championship will continue until that point tonight. The final table will stream live at 4 PM ET on Friday, June 28.

The reigning World Series of Poker Player of the Year is also the most dominate player at the WSOP since Ivey last won a bracelet. In the years since Deeb won his first bracelet in 2015, only three players have more WSOP cashes and no one has more single digit results, podium finishes, or bracelets.

That domination has continued into 2019. Deeb registered a runner-up finish in the $10,000 Dealer’s Choice and his PPC cash is his 12th. Where Deeb finishes could creative a few different narratives, as he’s trying to become the first player to defend his Player of the Year title in WSOP history.

Watch Day 4 of the $50,000 Poker Players Championship exclusively on PokerGO at 6 PM ET.