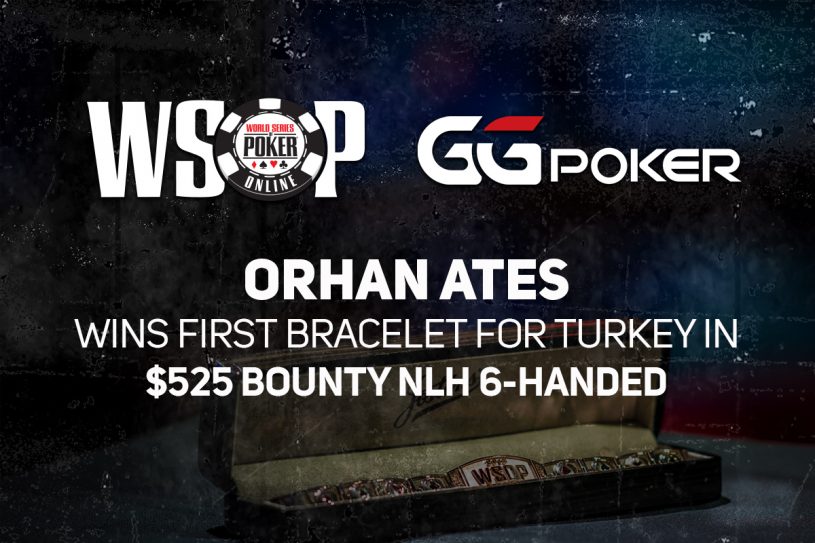 The 2020 World Series of Poker Online on GGPoker continued on Thursday with Event #60: $525 Bounty No-Limit Hold’em 6-Handed attracting an 3,170-entrant field that created a prize pool of $1,585,000. After nearly 12 hours of play, Turkey’s Orhan “yirtil” Ates defeated Tobias “juanson” Schwecht heads-up to win a $114,584 in prize money, plus $65,593 in bounties, along with not only his first WSOP bracelet – but the first WSOP bracelet for Turkey.

After bursting the final table bubble, Ates would hold the chip lead over the final nine players. Arsens Sakanjans would be the first to fall when he lost ace-ten to ace-six, before Jeff Hakim exited in eighth when his pocket tens were no match for Ates’ pocket kings. Augusto Hagen would find himself all in holding king-ten, but be unable to win a race against the pocket eights of Caique Sanches.

Gaurav Sood would be the next to fall when his ace-jack couldn’t outdraw the pocket queens of Schwecht, and soon after that, Sanches fell in fifth when his aces were cracked by Ates’ pocket tens after he made a runner-runner straight. Alexandre Reard called all-in with bottom pair against Schwecht holding jack-high. Unfortunately for Reard, Schwecht went runner-runner for a straight and reduced the tournament to three-handed play.

Just several hands later, Tomas Jozonis would exit in third when he was outdrawn by Schwecht as he entered heads-up play with a three-to-one advantage over Ates. Ates managed to take the lead, and then extend it before the final hand saw Schwecht all-in on a queen-high flop with aces against the top pair of Ates. However, Ates would strike trips on the river to eliminate Schwecht and simultaneously be crowned the Event #60 champion.

Ates has accumulated just over $933,000 in lifetime tournament earnings with his biggest result being a third-place finish in the Merit Gangsters Poker Cup Main Event in 2018 for $185,000. Not only is Ates collecting his first WSOP bracelet, but he is also winning the first one for the country of Turkey.