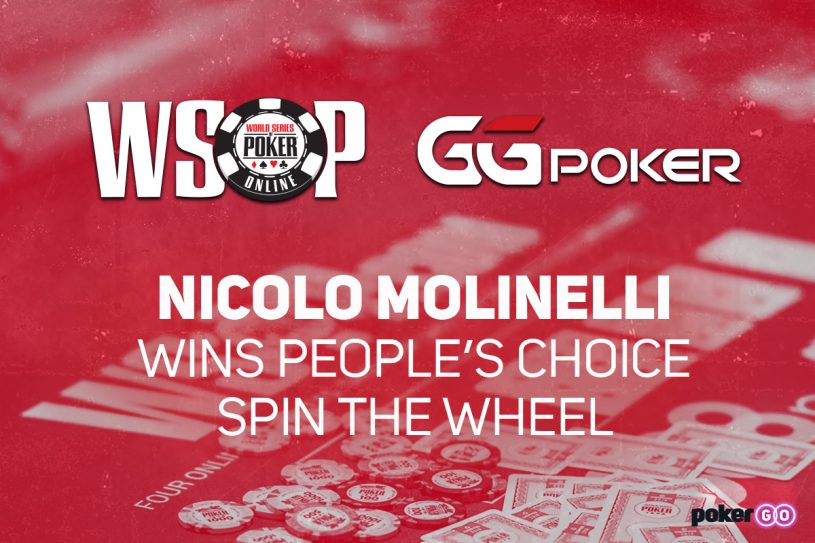 The 2020 World Series of Poker Online on GGPoker continued on Thursday with the conclusion of Event #81: People’s Choice Spin the Wheel. There would be no present tournament format as the structure would be determined by spinning a prize wheel. Once the options were determined, Event #81 would be a $1,050 No-Limit Hold’em 6-Handed Bounty tournament that attracted a 1,925-entrant field which created a $1,925,000 prize pool.

Following the money bubble bursting, the final 278 players would finish in-the-money and included the likes of Pete Chen, Kevin Martin, Daniel Negreanu, Patrick Tardif, Brian Rast, Joseph Cheong, and Sergi Reixach. Nicolo Molinelli entered the final table holding a slight chip lead over WPT Champions Club member Pavel Plesuv. Molinelli immediately took a sizeable pot from Plesuv, before it would be Michelle Shah falling in ninth-place after losing a race holding pocket eights to the ace-queen of Molinelli. Plesuv would be the next to fall when his pocket fives was outdrawn by Lucas Hafner’s ace-king. Itai Drory exited in seventh-place when his pocket eights were otudrawn by Molinelli’s queen-ten, as Aleksandr Grishchuk exited in sixth when his pocket jacks were outflopped by Sami Kelopuro‘s ace-queen.

After chips circled for a while, Kelopuro would be the next to fall when his pocket kings would be four-flushed by the ace-queen of Kyle Menard. Longyun Li exited in fourth-place after his king-six couldn’t spike against the ace-ten of Menard, before Hafner ran into Molinelli’s aces to fall in third. Molinelli held a slight lead over Menard entering heads-up play, and after an hour of play, the final hand would play out that saw Menard all-in with ace-queen against the king-eight of Molinelli. The flop brought a king and Menard was unable to improve and was eliminated in second-place as Molinelli was crowned the Event #81 champion and recipient of the $144,199 first-place prize and $99,216 in bounties, along with the WSOP bracelet.

Following a break on Friday, the weekend will see the final six WSOP bracelets awarded – including the conclusion of Event #77: $5,000 Main Event and Event #79: People’s Choice $25,000 Heads-Up.