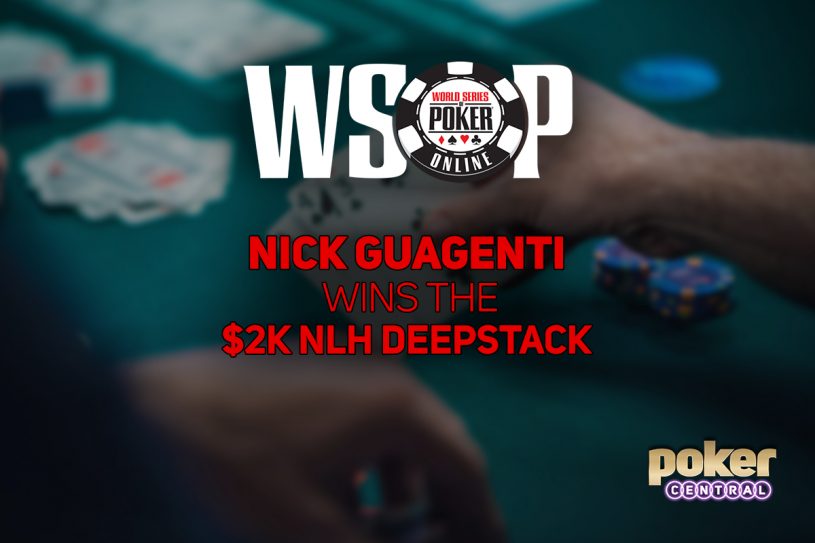 The 2020 World Series of Poker Online continued on Wednesday with Event #29: $2,000 No-Limit Hold’em Deepstack attracting a 747-entrant field which created a $1,419,300 prize pool. After roughly 11 hours of play it would be WSOP veteran Nick “shadowjacker” Guagenti emerging victorious to collect the $305,433 first-place prize and his first WSOP bracelet.

Matthew “EarvinMagic” Parry held a slender chip lead heading into the final table over Brian “BD_out” Deutschmeister. WSOP bracelet winner Tom “.beast.” Cannuli was the first to fall losing ace-six to Deutschmeister’s ace-jack. James “DanFriel” Gilbert would then exit in eighth when his queen-nine couldn’t improve against Parry’s ace-queen. Rory “peeeeeeeeeno” Brown was eliminated in seventh losing ace-jack to Deutschmeister’s ten-eight. Vinny “brownmagic” Pahuja and Ari “philivey” Engel then got tangled into a pot with both players flopping the same pair. Engel had Pahuja out-kicked, and it remained that way as Pahuja fell in sixth. WSOP bracelet winner Ryan “toosick” Tosoc would see his pocket fours fall to Parry’s pocket sevens, and when Engel ran his nine-six into Guagenti’s ace-nine in a blind-on-blind battle, he exited in third. Guagenti held roughly a three-to-two chip lead over Parry, and on the final hand, Parry was all-in on the flop holding top pair, but Guagenti had flopped the nut straight. Guagenti faded the runner-runner outdraw from Parry, and was crowned the Event #29 champion.

The Ohio-native has amassed over $1.3 million in lifetime tournament earnings which included over $680,000 in earnings, and 52 cashes in WSOP-related events. Guagaenti has sat at three WSOP final tables with his best result being a third-place finish in the 2019 $3,000 H.O.R.S.E., but following his win in Event #29, he is now a WSOP bracelet winner.

Ian “ApokerJoker2” Steinman has moved into the lead ahead of Ryan “im.sorry” Torgersen. Robert “BustinBalls” Kuhn has dropped to third overall, and William “SlaweelRyam” Romaine and Philip “tomte” Yeh round out the top five. To view the full leaderboard, click here.