You are here
Home > News > “My Parents Taught Me That Success is Not Based on Keeping Score Through Dollar Signs,” Maria Ho. 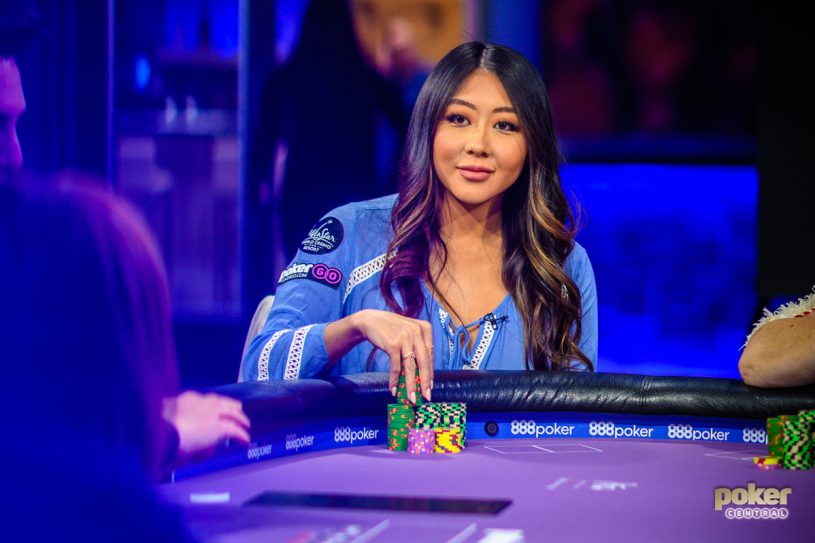 Maria Ho in action during Poker After Dark in PokerGO.

Maria Ho is on the brink of hitting a variety of career milestones in poker as she readies herself for the biggest final table in her poker career. At the end of May, with $715,175 and the WPT Seminole Hard Rock Poker Showdown title up for grabs, Ho will be taking her seat inside the HyperX Esports Arena at The Luxor in Las Vegas. After making the final table last week, we caught with Ho to talk about the gravity of the moment, expecting the unexpected, and the potential of winning a big event in front of friends and family.

“I am still a little bit in shock and I can’t really believe it,” Ho said on making this massive final table, outlasting a field of 1,360 entries, “When you’re playing poker day after day, you’re just trying to have a singular focus of taking it hand-by-hand and reaching the final table is never something I allow myself to think about so I’m just still processing it.”

On the day leading up to her making the final six, lead by WPT Champions Club member James Carroll and flanked by the likes of two-time WPT champion Eric Afriat and former November Niner Jerry Wong, Ho rose up the ranks to find herself second in chips.

“The final day was intense with the final table looming over all our heads but I just continued to push that thought to the back of my mind so I could focus on what I was there to do.”

Ho battled through ups and down, continuing to take things one hand at a time, using her combined experience from more than a decade in the game to keep her mind right.

“You can’t let that fear set in of, ‘Ok, I might need to not play any hands because I want to make this final table’ and you don’t want to be stifled from playing your game because of your chip stack, because you know how to navigate it. You have to be confident that you can do that.”

Having previously come very close to winning a World Series of Poker bracelet back in 2011 when she finished runner-up to Allen Bari in the $5,000 No Limit Hold’em, Ho knows what it’s like to play for a big title and big money. The previous experience is taken into consideration, Ho doesn’t want to create high expectations for this upcoming final table.

“I expect the unexpected. I do feel very confident and I would say that given the situation, me being second in chips, and other dynamics at this particular final table, I feel like I’ve been set up to succeed. I hope everything that is out of my control will work out for me.”

While a big win would be amazing and give Ho a great sense of accomplishment, it’s not something she feels she needs to get validation for where she stands in the game.

“If I were to be able to close this one out that would be so tremendous, not in terms of it being a benchmark or just something that I can look at on paper, but it would be very special for me because I’ve been playing this game for so long.”

As featured on Pokerography on PokerGO, Maria’s family has not always fully understood and supported her career path, and as they aren’t tracking her GPI placement or HendonMob results, so it’s important to them that she’s fully dedicated to that one thing she decides to go after.

This upcoming final table is another showcase that the path she chose is the right one for her despite the singular result, in a vacuum, not being the one thing that would validate everything she’s done to this point as the pursuit of the journey will always remain to be the most meaningful.

“My parents taught me that success is not based on keeping score through dollar signs. I think that’s an amazing thing, as they taught me that success is hard work and dedication. My dad has said, ‘I don’t care that much about what you do, but if you’re going to dedicate yourself to something I want you to try to be the best at that’ and I feel as though they would be so proud if I were to win because they know how much I want this.”

“Any kind of demarcation of my career goes to them. They have my Global Poker Award and if I win this one, they will get the trophy. I would love to be able to give the this.”

The first prize of this event includes a $15,000 seat into the season-ending Baccarat Crystal WPT Tournament of Champions. Stay tuned for more on this event and an exclusive feature interview with Maria Ho right here on Poker Central. Catch the World Poker Tour on-demand on PokerGO right now.