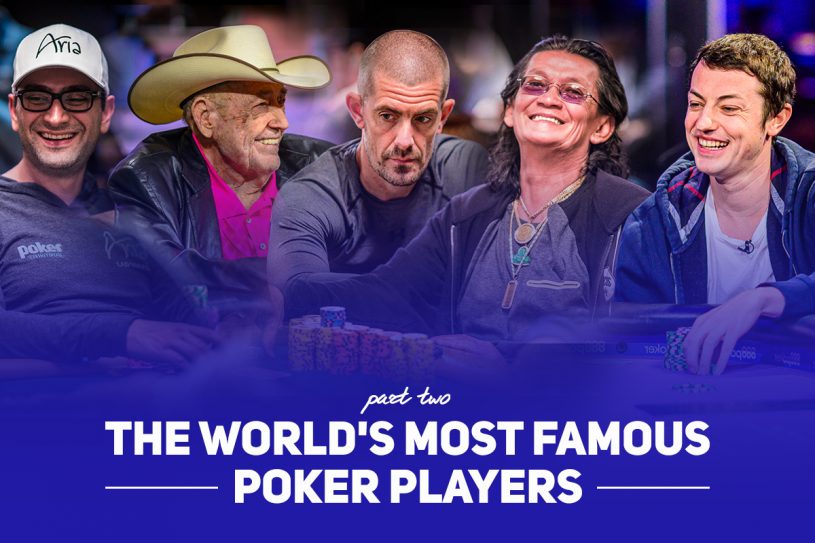 In our quest for mapping out the most famous poker players in the world, here's Part 2 featuring Doyle Brunson, Gus Hansen, and many more!

Poker is a game built for the narrative of history. There’s so much more on the turn of a card when you have an emotional investment in the players involved. Over the years, some of our favorite players to watch have been the ones who appeal to our love or hate trigger points. Some amongst these numbers could lay claim to be a player we love to hate – but which players do you love the most?

Doyle Brunson – The Godfather of the modern game, ‘Texas Dolly’ as he is known won two WSOP Main Events in back-to-back years in the 1970s with the same hand – ten-deuce. While Brunson has recently retired from tournaments at the World Series of Poker, you won’t find a player with more heart in the cash games that dominate the headlines during the summer. A living legend, how many players can you tell who they are from their silhouette? The man in the hat is truly one of the best. Watch Dolly’s Game on PokerGO right now featuring The Godfather of Poker himself.

Phil Laak – a unique talent, Phil Laak has starred in some of the biggest games ever held, with old episodes of High Stakes Poker and Poker After Dark often dominated by his wise-cracking winning plays. Laak also holds a rather inglorious misnomer to his name, that being the time he folded the nuts through sheer exhaustion during an endurance-based cash game marathon. Watch the Phil Laak Pokerography on PokerGO right here.

Tom Dwan – One of the most enigmatic players in the world, Tom Dwan was the darling of the uber-aggressive online set before becoming a high stakes cash game legend in shows such as Poker After Dark. Having returned to the spotlight more in 2019 when playing Short Deck poker, maybe Dwan could yet return to fanboy fame over the coming years. Watch Tom Dwan on the Poker Central Podcast right here.

Antonio Esfandiari – The Magician – and former member of the Magic Circle can lay claim to having been shot by Dan Bilzerian, beaten Kevin Hart in a boxing match and being the ‘Burning Man’ of poker for many years. Undoubtedly his best win, however, was when he won the first-ever Big One for One Drop in 2012, beating Sam Trickett heads-up to take home $18 million.

Johnny Chan – The Orient Express has been a two-time back-to-back WSOP Main Event winner, too, taking the bracelet in 1987 and 1988. Denied by Phil Hellmuth in 1989, Chan has never got so close again since, but has featured in a Hollywood movie about poker – 1998’s Rounders – and remains a poker legend who still counts Las Vegas as his second home.

Gus Hansen – The Great Dane is a player who no-one has figured out, possibly including himself. Hansen has published a poker book, won countless events, often with huge amounts on the line, such as the original Poker Million, which featured the worst money bubble in history… the winner took a million dollars, the runner-up won nothing! Hansen plays less than he used to in the years he dominated online at Full Tilt Poker and live at the high stakes cash game felt but remains a man everyone wants to beat… or be.

Scotty Nguyen – The WSOP Main Event champion no-one can resist smiling at, baby. One of the greatest and most dramatic winners in WSOP history, his famous line ‘You call, it’s gonna be all over, baby’ has gone down in history. Still in love with Las Vegas, his adopted home town, Nguyen is still one of the most dedicated players in WSOP events, baby.

Howard Lederer – No list of poker legends would be complete without the clown prince of players you love to hate. After a hugely successful decade in tournaments and high stakes cash games, embroiled in the negativity surrounding Full Tilt Poker and Black Friday, Lederer’s name continues to be mud, with players who see him playing cash at the World Series of Poker committed to reminding him of his flaws.

Want to watch your favorite poker legends in action? Subscribe to PokerGO today and you can have 24/7 access to the world’s best live streaming action, exclusive documentaries and classic shows on demand.