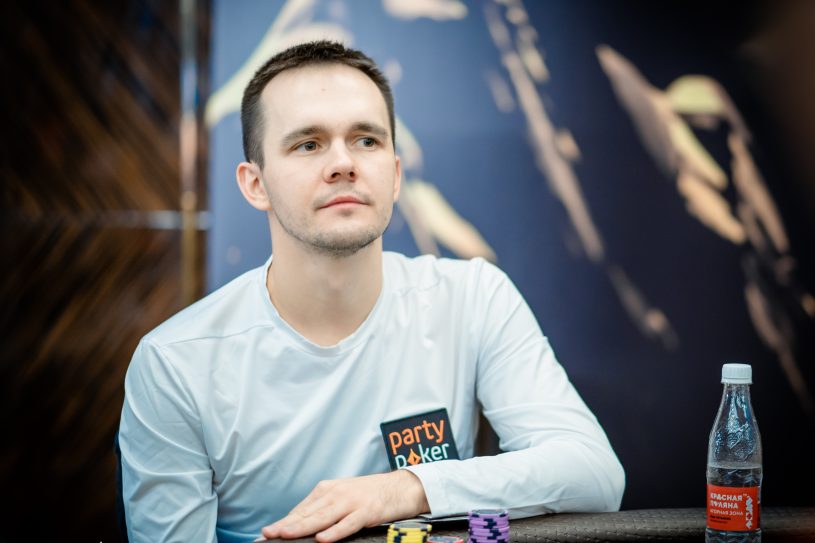 The partypoker LIVE MILLIONS Super High Roller Series in Sochi has now seen Day 1 of Event #4: $50,000 No-Limit Hold’em come to an end on level 13 with 31:31 remaining on the clock. The first $50,000 buy-in event of the series drew 45 players and by night’s end, only seven remained with partypoker pro Mikita Badziakouski sitting on top of the leaderboard with his 1,565,000 in chips.

Badziakouski may have finished atop the chip counts but his day was no walk in the park as he took on multiple hurdles en route to bagging the lead. The Belarus native saw his momentum pick up after a hand with Paul Phua when Badziakouski pushed in a pot-sized bet on the turn and river with his flopped straight. Phua paid him off and Badziakouski began his heater.

The final two tables were set just moments after Badzuakouski took down that pot from Phua and it was not long before the two had it out for each other again. Phua pushed his remaining chips into the middle with big slick and looked excited to get a call from Badziakouski until he turned over a pair of aces. The board came down clean and Phua took an exit, adding the rest of his chips to Badziakouski’s stack who did not waste them as he kept pace throughout the last stages of the night and will be entering the final day as the leader.

Closest behind the partypoker pro on the totem pole is Aaron Var Blarcum with 1,245,000. Blarcum is now playing a back-to-back final table session that saw his first appearance end with a sixth-place finish for $91,500 which brought his total live earnings over the $3.5 million mark. The American will be starting the day in much better shape than his first final table and will be looking to take down his first event of the series.

Rounding out the top three is Cary Katz who undeniably one of the best in the business with a resume that not many can beat, having over $27 million in career earnings. Katz will be coming into Day 2 with 1,170,000 and more than enough high stakes experience to take down this event, adding yet another Super High Roller victory under his belt.

Wiktor Malinowski, otherwise known as “limitless” is an online crusher who climbed from freerolls to the biggest buy-ins that any site had to offer. The Polish pro will be starting the final day with 400,000 which is second last on the leaderboard but will surely be someone to watch for as the action unfolds on Day 2.

Filling out the other three seats in this star-studded final table are Artur Martirosyan (1,105,000), Luc Greenwood (920,000), and Sam Greenwood (350,000). Martirosyan is a relatively unknown player to the high roller scene but the Greenwood brothers have been around for block once or twice. Luc will be bumping is live career earnings over $4.4 million tomorrow and Sam will see his resume hit the $21.5 million mark at least. Both are heavy hitters that will make their presence felt tomorrow when Day 2 kicks-off.

Play began at 3 p.m. (MSK) with an impressive four tables kicking off the action and by the time late registration had closed there was a total of 45 entry slips sold which accumulated a prize pool of $2,250,000. The top seven were then set to find a payday with a min-cash worth $112,500 and a top prize of $765,000 headed to the eventual winner.