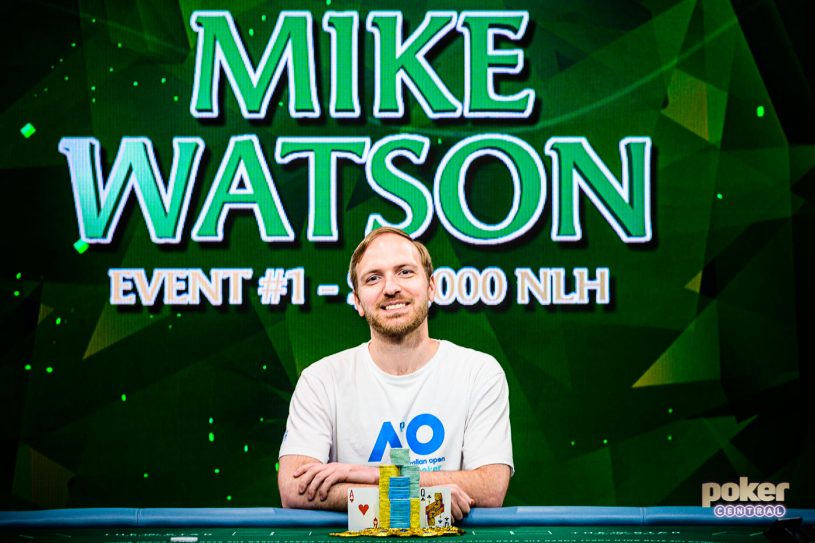 Mike Watson wins the opening event of the inaugural Australian Poker Open for A$177,000.

Mike Watson has done it! Four years after his last live tournament victory the Canadian pro has won the opening event of the inaugural Australian Poker Open at Star Gold Coast for $177,000, defeating 59 total entries.

Leading the Australian Poker Open after winning the first event puts the Canadian pro, who now has over $12 million in career tournaments earnings, in pole position for the Championship trophy and $50,000 top prize for player of the series. With this win, Watson also becomes the first leader in the Poker Central High Roller of the Year leader board which has a top prize of $100,000.

Watson will play every event at the Australian Poker Open and aside from the poker, he’s having a blast here so far.

“I really like it here at the Star, the hotel and casino are nice and I really enjoy playing here so far. It’s also nice being in Gold Coast, just a few minutes away from the beach, little shops, restaurants, and stuff like that. I’m looking forward to having a chance to explore things a bit more while I’m here.”

Looking ahead, Watson is excited about what’s to come as he jumped straight into the $10,000 Pot Limit Omaha event and all that’s still to come.

“The schedule looks great and the good turnouts of the first couple of events will hopefully continue into the higher stakes. We do know though that things always get a bit more serious as the stakes get higher with a lot of the same faces but that is to be expected. I think it’s a great schedule for me and I’m excited for a great week of poker.

Watch the final table of Event #2 of the Australian Poker Open live on PokerGO on Sunday at 1pm AEST, 4am CET, 10pm ET, and 7pm PT. New to PokerGO? Subscribe right now.