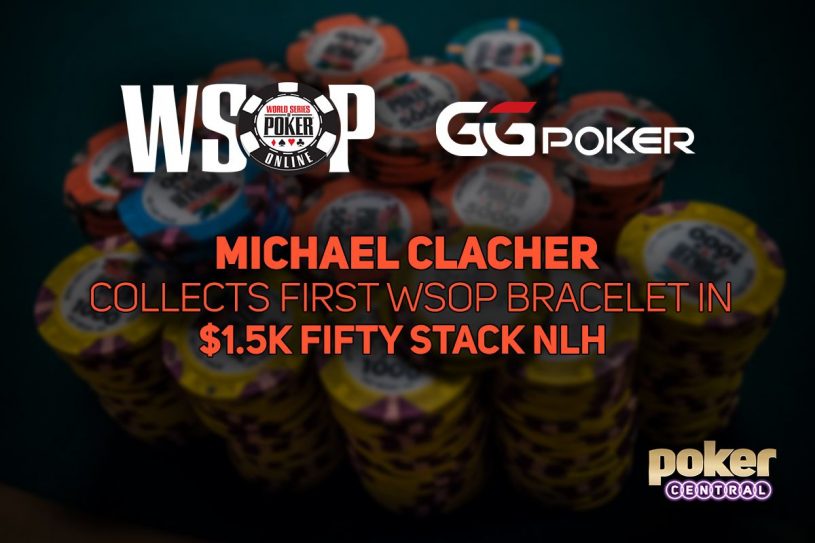 The 2020 World Series of Poker Online continued on GGPoker on Wednesday with Event #36: $1,500 FIFTY STACK No-Limit Hold’em attracting a 1,342-entrant field that created a $1,912,350 prize pool. South Africa’s Michael “YesPlease” Clacher would break through to collect the $297,496 first-place prize and the WSOP bracelet – the third WSOP bracelet won by a South African, and the first since 1990.

Olivier “BigPapyBoss’ Rebello entered the final table with a nearly two-to-one advantage and he would immediately begin extending it when he eliminated Jose “Machenzzio” Davilla in ninth place winning a race with ace-eight against a pair of fours. A rapid fire of eliminations would follow as Viktor “Ryuzaki1” Zsemlye, Rich “DadPoker” Dixon, and Neel “Neel” Joshi all found themselves on the rail. Portugal’s Joao Vieira was the only WSOP bracelet winner at the final table, and his chase at a second bracelet would end in fifth place when his ace-seven was no match for Rodrigo “PAPAI_PIG” Caprioli’s ace-jack as the Brazilian distanced himself as the chip leader. Martin “FuTimReilly” Zamani would be eliminated next in fourth when his ace-nine failed to outdraw Caprioli’s ace-jack, and after Rebello lost a race to fall in third, Clacher would hold a slight chip lead over Caprioli entering heads-up play. Clacher immediately pulled ahead, and on the final hand, Caprioli would shove the river with a busted straight draw and eight-high, and Clacher called with two pair to eliminate Caprioli in second place and simultaneously be crowned the Event #36 champion.