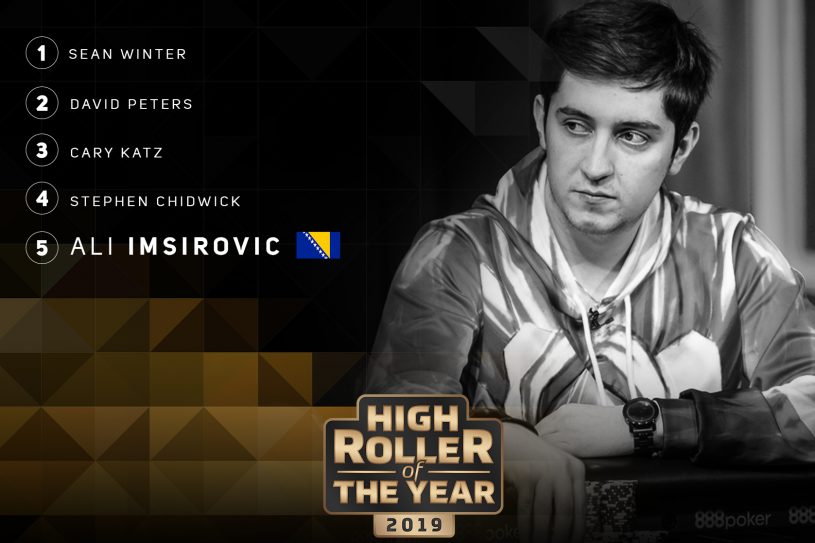 Ali Imsirovic is into the High Roller of the Year top-five after picking up his second win of the year. (Photo: Poker Central)

April showers bring May flowers. While the 2019 High Roller of the Year race won’t bloom until Super High Roller Bowl VI in December, April’s HROY events will set the stage for a busy summer. The 35 eligible events scheduled from May to July will play a major roll in determining how the HROY leaderboard looks heading into the second half of the season, but Ali Imsirovic isn’t waiting until the summer. The reigning Poker Masters champion moved into the top-five after picking up his second win of the year at Bellagio.

The current top-five is shown below and more High Roller of the Year information, including an upcoming schedule, can be found here.

With two months left in the 1994 Major League Baseball season, Tony Gwynn was batting .394. On August 12 of that year, baseball entered into a work stoppage and the strike robbed Gwynn of a chance to become the first player to finish a season with an over .400 batting average since Ted Williams. Ali Imsirovic positioned himself to make a run at the 2018 High Roller of the Year title, but a schedule shift interrupted the Poker Masters champion’s HROY attempt.

The inaugural High Roller of the Year race was cut short, ending with Super High Roller Bowl V in December instead of the following spring. HROY alterations behind him, Imsirovic is picking up where he left off and back into contention. The Poker Masters champion started this season strong with a $25,000 NLH victory at the U.S. Poker Open and he picked up a second win last week at Bellagio. Imsirovic beat Kristen Bicknell heads up in the second $10,000 NLH event of the weekend, which was enough to push him into the top-five.

Earlier this month, Kristen Bicknell claimed her GPI Female Player of the Year award at the Global Poker Awards. On both sides of that victory, Bicknell has had to settle for runner-up High Roller of the Year finishes. The first was to Maria Ho in California and the second was to the previously mentioned Ali Imsirovic at Bellagio.

Those two runner-up finishes and a U.S. Poker Open cash have Bicknell into the High Roller of the Year top-ten for the first time this year. She currently sits 8th on 340 points and while that leaves Bicknell 150 points outside of the top-five, she is also only 100 points clear of Jordan Cristos, who sits 22nd. That top-25 traffic jam should break this summer and Bicknell has positioned herself well heading into that busy schedule.

Seth Davies recorded two podium finishes at Bellagio, including a victory in the opening $10,000 NLH event…Davies has five High Roller of the Year cashes. He and Cary Katz are tied for the second-most cashes of 2019, trailing HROY leader Sean Winter, who has six…Aram Zobian jumped up the leaderboard with his second result of the season…Zobian now sits 35th on 100 points…Nick Schulman conceded his top-five for the first time this season, dropping to 6th place with 410 points.

The High Roller of the Year race continues in April with ARIA High Roller Series events. Dates and multiplier information is provided below: