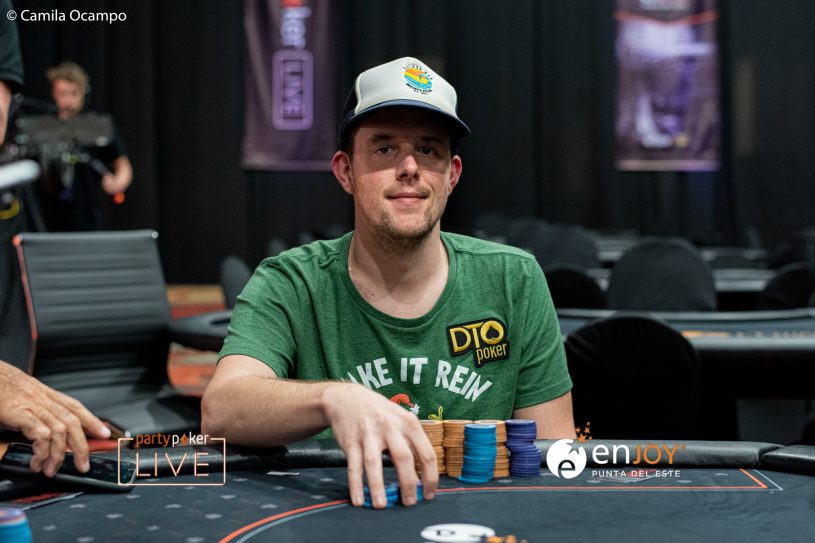 Marty Mathis leads the final 15 of the biggest buy-in event in the history of Uruguay.

Play got underway in Uruguay’s biggest buy-in tournament at 1 pm local time, with four players taking their seats. Before the first level was in the books, that number had grown to nine players, with more players joining the action throughout the day. A total of 27 unique players made for 35 entries in total.

Antonio Martinac was the first player to make use of the option to reenter and faired much better on his second bullet. Leo Fernandez followed Martinac to the buy-in desk for his second try, having run out of chips losing with a rivered set of queens to De Albuquerque’s turned straight.

Such famous players as bracelet winners Anthony Zinno, Yuri Martins Dzivielevski, and regular high rollers Robert Heidorn and Felix Bleiker tried their luck in the $25,500 buy-in tournament but exited well before the end of the day.

partypoker’s Dzmitry Urbanovich and Joao Simao shared a tabled for the last few levels and will both return tomorrow at noon for Day 2. Urbanovich brings 2.675 million in chips, while Simao will start with 1,395,000.

They both trail Marty Mathis, who bagged 4,315,000 in chips after twelve levels of play. Mathis is just ahead of James Romero, who entered halfway through the day and turned his 1,000,000 starting stack into 4.3 million. Mathis busted both Heidorn and Scholten to finish with the top stack in the room.