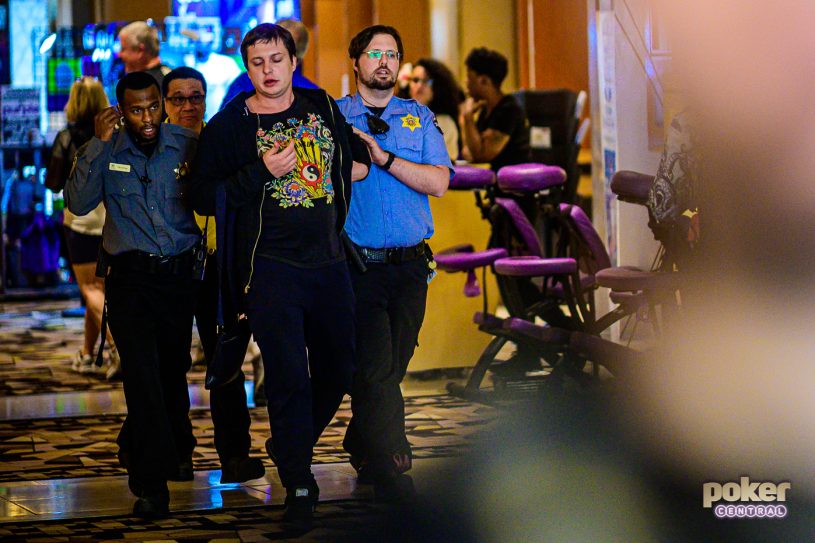 Georgii Belianin gets escorted off property for allegedly stealing chips. Full story near bottom of the article.

The 2019 World Series of Poker Main Event is only on Day 1c and plenty of drama has already transpired with two players getting disqualified today while two players last night were on the brink as well due to some inebriated antics. Some people just can’t handle the world’s largest poker tournament!

A viral video sensation is taking the poker world by storm as a man has been disqualified from Day 1c of the 2019 WSOP Main Event for dropping his pants and throwing a shoe at the dealer. Players near the situation told us the following.

“He didn’t seem drunk but he went all in blind before the dealer was even done dealing. A member of the floor staff was called over at that moment and while being talked to by the floor staff member he dropped his pants. After picking his pants back up, he threw his shoe across the table.”

The player in question was disqualified after this incident. The video below shoes the shoe throwing, an extended version of this video is available here. (NSFW)

Just happened at the WSOP Main Event. (Drunk?) dude all in blind preflop (full stack) level one. Tables his hand early. Takes shoe off and throws it at a dealer / player in the tank.

Who throws a shoe?
(Hilarious, but not great for the game…)

Earlier today, on Day 1c, a player by the name of Georgii Belianin was disqualified for allegedly grabbing the stack from the empty seat next to him. Andrew Barber first reported it on Twitter as Belianin was escorted from the property.

From a source: "He was in seat 5. Seat 6 chips were out, player not checked in. He won a pot and took the entire seat 6 stack too"

While not getting disqualified, on Day 1b there was also drama surrounding two players that had a few too many. Poker Central photographer Drew Amato happened to be on the scene for this situation as he relayed the following to us.

“Right before dinner, there were two gentlemen at the table next to each other, both so intoxicated they both received unrelated penalties. At the first table, you had an older gentleman that was so drunk he spilled two drinks on the table. The dealer eventually called the floor because the gentleman, who was in the 9 seat, would not stop coughing on the dealer. He was sent on dinner break 30 minutes early, and eventually returned with about 40 minutes left on break and slept on his scooter.”

Drew Amato continues, “On the other table, a player had a few too many soda pops and was moving all in blind every hand. When no one wanted to call him, he would berate the table for being afraid to burn their $10,000 entry. Eventually, he moved all in and showed

, and his opponent called with pocket sevens. The player flopped a deuce and rivered a five to eliminate his opponent. He was given a penalty for exposing his hand and had to sit out an orbit. After dinner, he was dragged out by security and given yet another penalty. He eventually returned to his table and settled down a little bit.”

The WSOP Main Event is too much to handle for some but as the dust settles on the world’s greatest event everyone will be focused again on playing for that massive first prize in the $8 million range. Day 1c will continue until roughly 1:00 am local time before Day 2a/b starts on Saturday. The final table for this year’s Main Event starts on July 14 on ESPN.