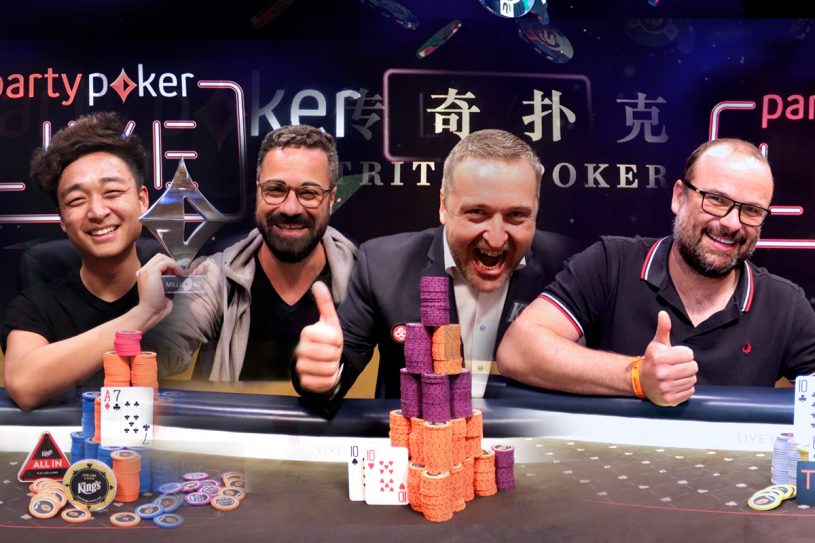 Looking back at all the winners from the partypoker LIVE Europe Millions in Rozvadov!

After a fun-filled festival, partypoker LIVE players won over $10 million in prizes at the MILLIONS Europe festival at King’s Casino in Rozvadov.

KISACIKOGLU IS KING OF THE €100,000 TRITON SUPER HIGH ROLLER

Turkish player Orpen Kisacikoglu took down the €100,000-entry Triton Super High Roller at the beginning of a very busy week of action, with a thrilling final table seeing the ebullient player proving you can be entertaining and successful in poker as well as life.

With a star-studded final table proving stiff competition for Kisacikoglu, partypoker pro Kristen Bicknell was the first player to be paid out, sneaking into the money for $238,684. It was Poker Central’s own Cary Katz who came fifth before Wai Yong bowed out and High Roller regular Ben Heath finished in third place.

Heads-up was a clash between two of Eastern Europe’s finest exports, with Vladimir Troyanovskiy finishing as runner-up to the eponymous Turkish professional who has seen his results improve on a steady line as he has risen up the buy-in levels in recent years.

Antanas Guoga, commonly known as ‘Tony G’ to millions of poker fans worldwide, took down the partypoker LIVE MILLIONS Short Deck title to win€237,250 (a massive $264,308 in American dollars) in Rozvadov and return to the headlines of the poker press around the world.

While the two locations share a bustling atmosphere, heated discussions and differing opinions on the right move forward, glory is available at the poker felt, and Guoga is at home where there is glory on the line.

TONY FLIPS FOR THE WIN

While post-flop play in Short Deck is often skewed by the number of cards in the deck – hence the name – it was an all-in pre-flop scenario that gave Tony G the victory, his pocket tens making a full house on the river to hold against runner-up Yake Wu’s ace-jack.

Michael Zhang won over a million dollars in the first six days of August, finishing on the final table of the Triton £100,000 High Roller in London and then taking down the €25,000 High Roller title, outlasting players such as Tom Vogelsang and Paul Phua in a dramatic finale to a stunning event.

Zhang’s victory took him past the $3million mark in live tournament winnings and sealed a remarkable recent rise to fame for the English player. With cashes at the WSOP in Las Vegas, at the Aussie Millions and now at the Triton Series and in Rozvadov at King’s Casino, Zhang has proved he’s a man for all locations as well as seasons and will be a name to be reckoned with over the coming years in poker.

Lukas Zaskodny took the title against his friend Jacob Nejberg after a top-quality final table saw three big British names fade away after three coinflips ended their chances of victory at King’s Casino.

Both Zaskodny and Snejberg took home more money than they had ever earned in their live tournament poker careers before their meeting in Rozvadov, while Sam Grafton, Roberto Romanello and, in particular, Charlie Carrel had final days to forget, getting nowhere near the title, despite in Carrel’s case leading the event with eight players left at the start of play.

A series of unfortunate events at the table saw British hopes for a rowdy rail in Rozvadov die on the vine, as Zaskodny and Snjeberg carved through the field to eventually agree a deal and then play out an exciting and fun final heads-up that was wholly in keeping with the festival itself.

Want to watch the final day of the MILLIONS Europe Main Event? Check out the full repeat stream exclusively on PokerGO right here.