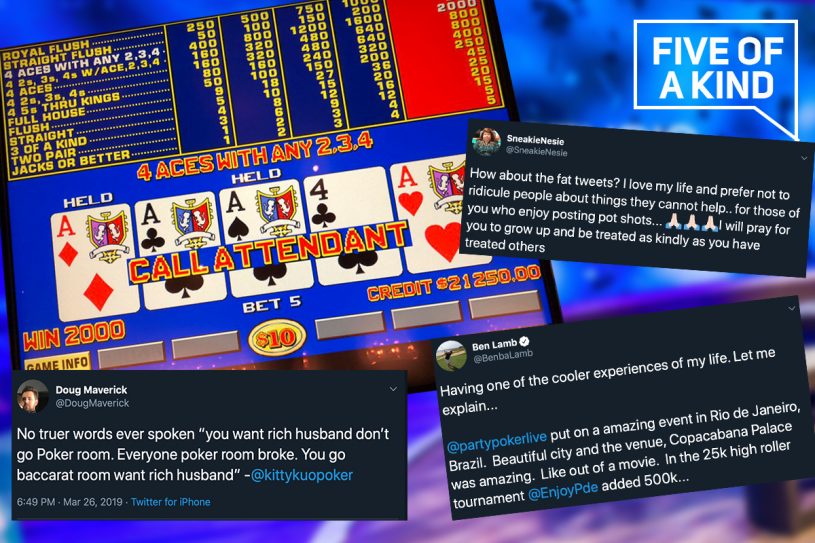 Five of a Kind brings you all the latest goodies from poker twitter!

Every week, Five of a Kind takes a light-hearted look at the Twitter drama, fun, excitement and much more! Leaving picking the best moments up to us so you don’t have to clog up your personal timeline!

Jason Somerville’s last 11 cashes have all come at the Run it Up Reno series that he organizes bi-annually at the lovely Peppermill Resort & Casino. In the last few years, Somerville’s been very active with his own studio in Las Vegas, expanding his Twitch empire to greater heights every year but it’s a shame w don’t see him in action during the big events anymore! Somerville’s last cash in a major event dates back to the 2016 World Series of Poker Main Event, but as the photo down below indicates: He hasn’t lost his magic touch! Congrats Jason!

who says I don’t know how to play poker any more?? 💵💵💵 pic.twitter.com/vShbnXd33q

Yesterday, Connor McGregor announced his retirement from the MMA, but Jamie Kerstetter isn’t sold on his withdrawal from the sport that brought him millions of dollars and global fame. In poker, we’ve seen fake retirements play out numerous times over the years but yet players are never truly ready to say goodbye to the game that brought them to the top. Will things be different for someone who was getting punched in for a living? Only time will tell!

Astutely noted by Doug Maverick in the Tweet below, Kitty Kuo shared some high-level dating advice for people looking for a rich husband! When school is in session with Kitty Kuo delivering the lectures you listen, ask questions and improve your approach to life. Thank you Kitty for teaching us your ways!

Is this the worst punt on the word “gambling” I could come up with? Yes. Was I following Ben Lamb’s Tweets with extra attention as he spun it up with Jonathan Depa and John Cynn? Obviously! Check out the whole thread below as Lamb and his buddies went on the adventure of a lifetime with some nice profits to show for!

Denise Pratt was a breath of fresh air with her entertaining appearance on Poker Ater Dark Femme Fatale II on PokerGO this week. While many loved the talkative, brash and confrontational style that Pratt displayed, the haters weren’t far behind. Don’t listen to the haters, Denise. We love you, keep it up!

Learn more about Denise Pratt in this candid interview on Poker Central. Link.

How about the fat tweets? I love my life and prefer not to ridicule people about things they cannot help.. for those of you who enjoy posting pot shots… 🙏🏻🙏🏻🙏🏻I will pray for you to grow up and be treated as kindly as you have treated others