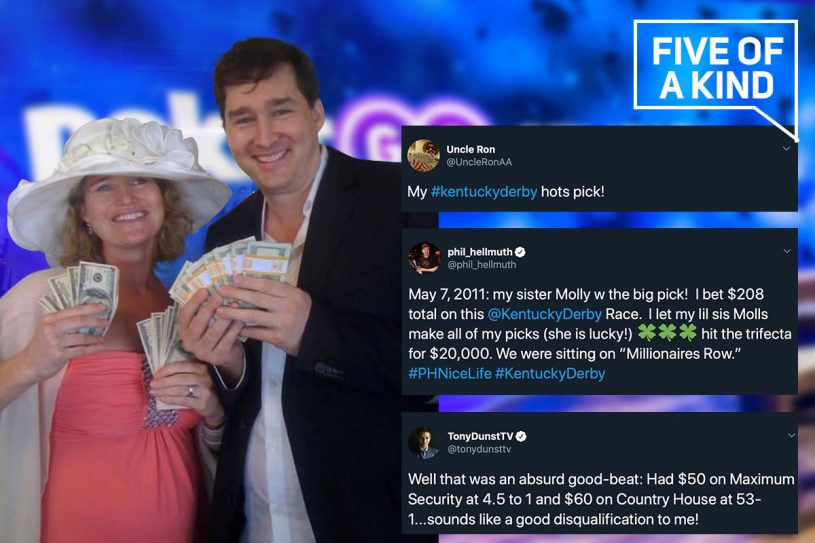 The Kentucky Derby was all the rage on Saturday and the poker world chimed in with hot takes and winning bets!

Every week, Five of a Kind recaps all the hottest poker action for you to enjoy and today we look back on the Kentucky Derby!

There’s nothing left to be said about Uncle Ron, but sometimes we have to include our favorite comedic genius poker fan and player! Ron had some takes on the Kentucky Derby but we’re not sure he’s ever going to win a bet!

Phil Hellmuth loves the horses, as evident from the photo at the bottom of this article, and he was also at the 2014 Derby where he was spotted with Lena Evans.

If you follow the lovely Lynn Gilmartin on social media you know that she had an absolute blast with the WPT crew that also included Adam Pliska, David Gitter, and Tony Dunst!

The dramatic Kentucky Derby of this year saw a disqualification of the winning horse and that was much to the delight to Tony Dunst! Dunst had a small amount on the winner at short odds but it was his similar bet at long odds that came through after replay review!

Well that was an absurd good-beat: Had $50 on Maximum Security at 4.5 to 1 and $60 on Country House at 53-1…sounds like a good disqualification to me!

Back in 2011, poker was really hurting but Phil Hellmuth pulled out a massive win at the Kentucky Derby along with his sister Molly! These are the kinds of bets everyone dreams of making and winning and it’s no surprise that Hellmuth was on the right side of this one!