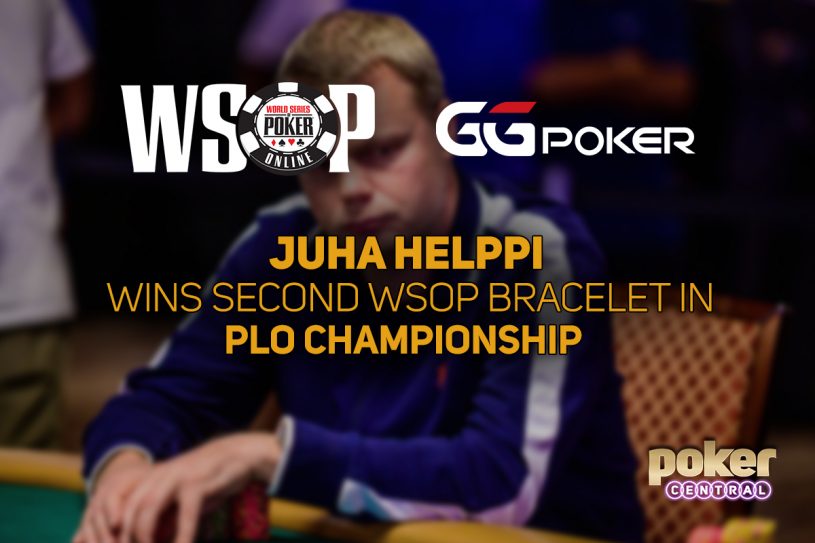 The 2020 World Series of Poker Online continued on GGPoker on Tuesday with Event #35: $5,000 Pot-Limit Omaha Championship attracting a 328-entrant field that created a $1,558,000 prize pool. Finish pro Juha Helppi topped the field to collect the $290,286 first-place and his second WSOP bracelet.

On the money bubble there would be two separate eliminations as Maxi Lehmanski was eliminated by Sergi Reixach, while on another table, Brian Green and his straight draw and kings couldn’t improve against Gavin Cochrane and his aces. With Green having less chips, he would be the bubble boy and Lehmanski would sneak into the money. Others heading to the rail short of the final table included Stephen Chidwick, Dario Alioto, Isaac Haxton, George Wolff, Anson Tsang, and Thai Ha.

Mike Watson entered the final table as chip leader as Alex “rubbherducy’ Difelice would be the first to fall when his two pair couldn’t hold against the straight draw of Jens “98snaeJ” Kyllonen. Marija “Maj Chenzie” Andrijasevic was eliminated in eighth-place, before Reixach exited in seventh seeing his kings outdraw by Watson’s turned two pair. WSOP bracelet winner Yuri Dzivielevski would hit the rail in sixth place when his aces were outdrawn by Kyllonen as he turned two pair.

Helppi held the lead as just five players remained before his fellow Finn Kyllonen would exit in fifth place to Belarmino “Iseey0urcard” De Souza as both players flopped straight draws and De Souza improved to a ten-high straight to pip Kyllonen’s nine-high straight. Watson would be the next out committing with a gutshot against Jesus Cortes’ flopped three pair. The turn struck Watson as he made broadway, but Cortes filled up on the river to take the chip lead into three-handed play.

De Souza would be unfortunate to fall in third when both he and Helppi each held queens. The ace on the river connected with Helppi’s dangler, and heads-up play began with Cortes holding a slight chip lead. Helppi found a double to take a commanding chip lead with top set, and although Cortes found two doubles, the final hand saw his two pair run into Helppi’s top set. Cortes would be unable to muster a runner-runner outdraw, and he would fall in second place as Helppi was crowned the Event #35 champion.

Helppi has amassed nearly $8 million in lifetime tournament earnings, but it wouldn’t be until 2019 where he broke through to win his first WSOP bracelet after defeating Mike Lancaster heads-up to win the Event #72: $10,000 Limit Hold’em Championship for $306,622. With his win here in the GGPoker WSOP Online, Helppi now breaks a tie with fellow Finnish players Kyllonen, Jani Vilmunen, and Ville Wahlbeck to hold a second WSOP bracelet.