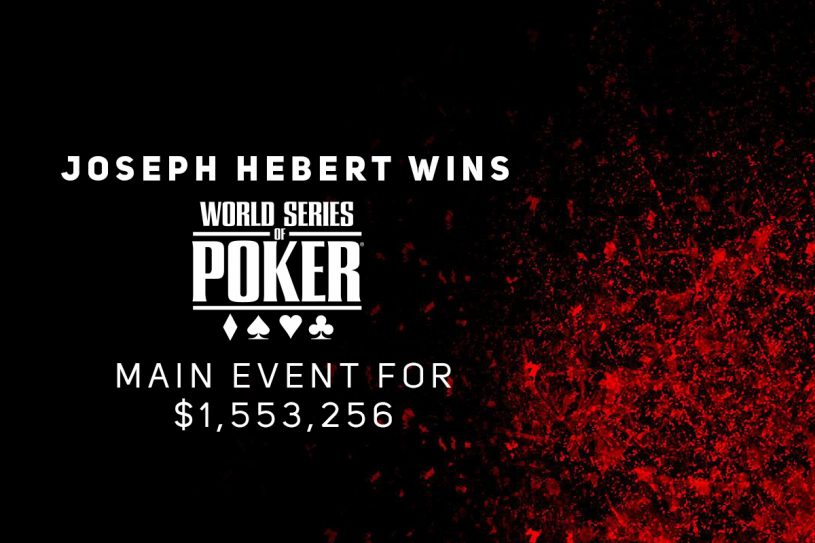 Following a two-week hiatus, the 2020 WSOP Main Event concluded on Monday evening from the Rio All-Suite Hotel & Casino in Las Vegas, Nevada. Entering the final table as chip leader, Joseph Herbert carried that lead through to topping the final table and the 705-player field to capture the $1,553,256 first-place prize.

Roughly 24 hours before the final table was set to begin, news broke that three-time WSOP bracelet winner Upeshka De Silva had tested positive for COVID-19 and was being disqualified from playing the final table. Social media swirled with multiple options that the WSOP could implement – but as were outlined in the terms and conditions of the tournament – De Silva would remain disqualified and be awarded ninth-place prize money of $98,813.

One of the final 9 for the @WSOP main event tomorrow at the Rio has tested positive for Covid-19 and has been disqualified.

Once players drew for seats and the cards were in the air, it would Gershon Distenfeld eliminated in eighth-place when his king-jack couldn’t outdraw the pocket queens of Ron Jenkins. Nearly eight orbits would pass before Shawn Stroke fell in seventh-place when he was all in for pocket threes against the pocket queens of Jenkins, and ace-king of Harrison Dobin. The board blanked out, and Stroke was eliminated while Jenkins more than doubled.

Hebert entered heads-up play holding a two-to-one chip advantage over Jenkins, and on the first hand Hebert four-bet shoved all-in and Jenkins called all-in holding pocket queens to be up against Hebert’s ace-queen. The flop brought an ace, and no case queen followed for Jenkins as he exited in second-place and Hebert was crowned the Domestic WSOP Main Event champion and recipient of the over $1.55 million first-place prize.

Hebert now sees his lifetime tournament earnings eclipse the $2.2 million mark, and he’ll have a chance to add another $1 million when he faces off with International WSOP Main Event champion Damian Salas for the coveted WSOP bracelet.

Originally scheduled to play on Wednesday, December 30, Salas was delayed on entering the United States due to him being in Europe within 15 days of his intended flight. Consequently, the Heads-Up Championship has now been moved to Sunday, January 3, where Hebert and Salas will play for the $1 million winner-take-all freeroll.