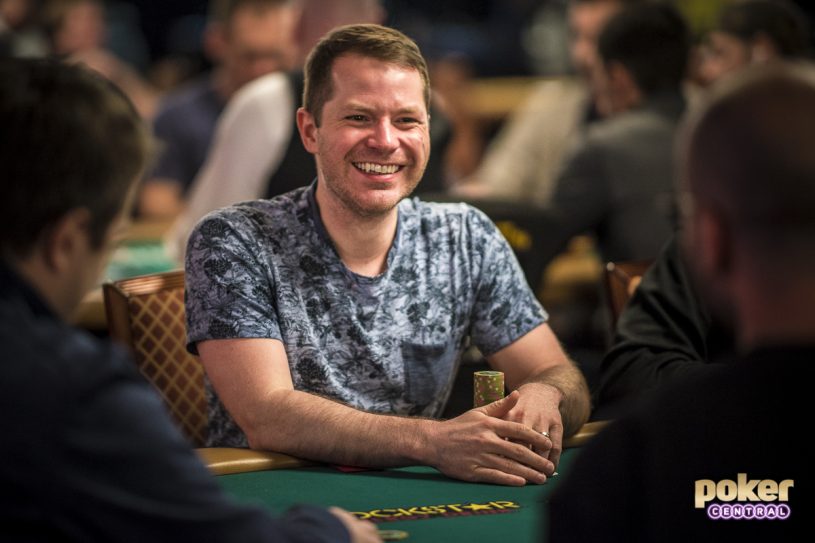 Jonathan Little was all smiles at the 2019 World Series of Poker already!

His name is synonymous with poker and Las Vegas for a variety of reasons, but on June 1st, Jonathan Little will have one single focus – taking down the WPT Tournament of Champions.

THE BIG MAN FOR ANY OCCASION

After many years of helping players reach their potential in poker whatever their level, the modest yet indomitable Little will be a force to be reckoned with at the Baccarat Crystal WPT Tournament of Champions when it kicks off. He’s excited to be shooting for a tournament he bubbled the money in just two years ago.

“It’s super-exciting to be at the HyperX Esports Arena,” says Little with a grin. “I’ve never been there, but I’ve seen some of the streams from the arena and it looks amazing.”

THE WPT FAN WHO GREW UP TO BECOME A WINNER

Little is also a big fan of the World Poker Tour and credits the brand with having the same kind of longevity that he is known for in the modern game.

“They have continued to work through poker booms and declines. The WPT has always been there. I remember watching the first two seasons as a young kid and wanting to be there one day. There’s legacy there and they’ve sported the poker community as long as any other brand out there, so I’ll happily continue to support them.”

Learn more about Jonathan Little by watching the PokerGO Original feature documentary Pokerography about his life.

Little won his first WPT Main Event many years ago now, nearer the start of his career than the current point. But he used it as a platform to continue to evolve as a player and person within the game.

“I learned a long time ago that if you’re not keeping up and staying ahead then you’re falling behind, so I’ve done lots of things so that I stay up to date on what is happening in the poker world. That’s how you continue to stay relevant and remain a good player.”

If all you can do is to improve at the game, then Little has, for many, been the player who epitomizes doing just that. He’s released a dozen books on poker that have helped hundreds of thousands of poker players.

LOVING THE GAME FOR THE GAME ITSELF

Many people have embarked on a poker career in an attempt to make a lot of money to do something else. It’s the polar opposite of how Little identifies with poker.

“I never viewed poker that way because I never played poker for the money. One of the side benefits of getting good at poker is that you get all the money. If you play it only trying to get rich and quit, you’ll lack motivation when times get tough and that’s part of the game. Most players who reach the top just love the game and never completely quit.”

Little’S strategy has always been a combination of playing a good fundamental strategy then tailoring his play to the strengths in his own game and the weaknesses he perceives in others.

“You have to learn about players to take advantage of anything they’ll do wrong. Let’s say you see someone give off a tell that they’re weak. They bet, and now you need to be raising with bluffs and calling with your made hands. It’s understanding how your actions and their actions should change your playing strategy.”

HAS THE GAME GOT TOUGHER?

Little accepts that while poker has become a game that has entered the mainstream and becomes so much more popular than players of a certain age could ever have believed, it’s also tougher than it was. But he doesn’t see that as a bad thing.

“The average skill level of players across the board is going up very quickly. It’s much more difficult for new people to get into the game, which is why I try to help new people get decent quickly so they don’t get crushed. The only way poker isn’t fun is if you lose a ton of money every time.”

Little’s philosophy is that all games get tougher over time. Everyone gets better across the board as people get better information and training. It has its benefits.

“It’s easier to get competent quickly and that leads to smaller edges across the board but that’s OK. All you can do is continue to improve at the game, show up at the table and play your absolute best. If I’m good at one thing, then that’s it. If I do that in the Tournament of Champions, I’ll be very happy.”

Jonathan Little admits that winning the Baccarat Crystal WPT Tournament of Champions would be a fantastic achievement. In a poker lifetime full of those, another Little victory really would be one for the books.

Tune into PokerGO to watch all the action in the Baccarat Crystal Tournament of Champions and see if Jonathan Little can bring home another trophy for his legions of fans. Subscribe now to PokerGO and you’ll have 24/7 access to the very best poker content.